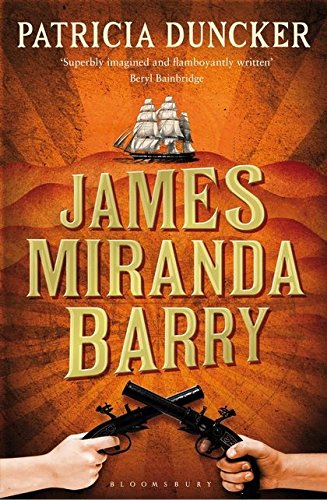 At the turn of the nineteenth century, ten-year-old James Miranda
Barry enrolled as a medical student in Edinburgh, the start of a
glorious career as a military surgeon. Across the Empire, Barry achieved
fame not only as a brilliant physician, but also a legendary duellist
and a celebrated social figure. But James Miranda Barry was also a
woman. Her greatest achievement of all had been to 'pass' for a man for
more than fifty years.

Patricia Duncker's novel tells
Barry's story for the first time, in a richly inventive and entertaining
tale of dark family secrets, adultery, questioned paternity and
colonial history. It confirms her rare talent as a writer of profound
ideas and immense storytelling power.

Patricia Dunker's third book is an elegant exploration of the way gender and identity shape a life. The starring role is given to James Miranda Barry, a 19th century society figure, who enrolled as a student at Edinburgh and carved out an illustrious medical career on three continents. Nothing too strange about that, except that James Miranda Barry lived life as a man but was actually a woman.

Duncker has created "an imaginative exploration" of the real Barry's life, adjusting facts and adding figures to transform a story of love and adventure into a masque of sexual identity, where the hero is really the leading lady and the love interest is a kitchen maid, turned actress, who relishes "the breeches parts" in Shakespeare's plays.

It's an enthralling, strange tale, peopled with actors and soldiers, artists and revolutionary generals. Illicit liaisons, adultery, confused paternity, colonial history and family secrets provide the transgressive background to Barry's disorientating transformation into someone who was "neither man nor woman but partook of both", who combined "a woman's delicacy and grace" with "the courage and skill of a man."

Duncker's literary skills are equally adept and disorienting. Her prose is cool and clean, shot through with lush descriptions of flowers and landscape (her decadence seems to be saved for the glories of nature). Although Alice Jones the kitchen maid actress can proclaim to Barry: "You are who the world says you are. And the world says you're a man" but with Duncker it isn't quite that simple. Barry's manly charade is played out with the subtle, startling awareness of his (sic) womanly identity. It makes for a very sophisticated narrative where all surfaces are deceptive and all experiences are dual. --Eithne Farry

'A powerful atmospheric and highly original novel, full of extraordinary events. Her book is both a superb historical recreation and a magical tour de force' (Mail on Sunday)

Book Description Paperback. Condition: Very Good. The book has been read, but is in excellent condition. Pages are intact and not marred by notes or highlighting. The spine remains undamaged. Seller Inventory # GOR003593811

Book Description Bloomsbury Publishing PLC, 2011. Paperback. Condition: Used; Good. **SHIPPED FROM UK** We believe you will be completely satisfied with our quick and reliable service. All orders are dispatched as swiftly as possible! Buy with confidence!. Seller Inventory # mon0001995498

Book Description Bloomsbury UK 2011-03-01, 2011. Paperback. Condition: Very Good. Item is in very good condition. If supplemental codes/CDs for textbooks are required please contact us prior to purchasing as they may be missing. Seller Inventory # DS-1408812169-2