Items related to Fools, Frauds and Firebrands: Thinkers of the New Left

Fools, Frauds and Firebrands: Thinkers of the New Left 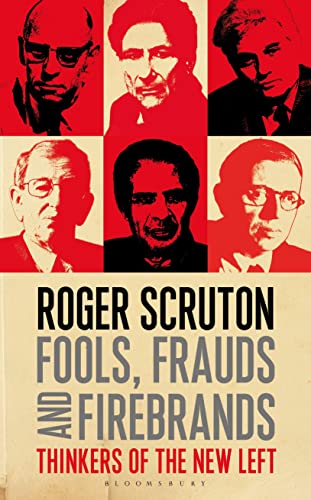 The thinkers who have been most influential on the attitudes of the New Left are examined in this study by one of the leading critics of leftist orientations in modern Western civilization. Scruton begins with a ruthless analysis of New Leftism and concludes with a critique of the key strands in its thinking. He conducts a reappraisal of such major left-wing thinkers as: E. P. Thompson, Ronald Dworkin, R. D. Laing, Jurgen Habermas, Gyorgy Lukacs, Jean-Paul Sartre, Jacques Derrida, Slavoj Zizek, Ralph Milliband and Eric Hobsbawm. In addition to assessments of these thinkers' philosophical and political contributions, the book contains a biographical and bibliographical section summarizing their careers and most important writings.

In Thinkers of the New Left Scruton asks, what does the Left look like today and as it has evolved since 1989? He charts the transfer of grievances from the working class to women, gays and immigrants, asks what can we put in the place of radical egalitarianism, and what explains the continued dominance of antinomian attitudes in the intellectual world? Can there be any foundation for resistance to the leftist agenda without religious faith?

Scruton's exploration of these important issues is written with skill, perception and at all times with pellucid clarity. The result is a devastating critique of modern left-wing thinking.

From the standpoint of a serious conservatism, it honestly assesses the political and philosophical contributions of the Left. The book also addresses what is likely our most pressing question: 'Can there be any foundation for resistance to the leftist agenda without religious faith?' - Catholic World Report

Since he no longer has a university career to protect, Scruton can now tweak the nose of academic leftism to his heart's content...Scruton is at his best, (and funniest) when trying to make sense of [Alain[ Badiou's weird confection historical materialism and Platonic mathematical theory - Jonathan Derbyshire, Prospect

The book is a masterpiece...In crisp, sometimes brilliant prose, Mr. Scruton considers scores of works in three languages, giving the reader an understanding of each thinker's overarching aim and his place within the multifaceted movement known as the New Left. He neither ridicules nor abuses the writers he considers; he patiently deconstructs them, first explaining their work in terms they themselves would recognize and then laying bare their warped assumptions and empty pretensions. - Barton Swaim, Wall Street Journal

I enjoyed this immensely, both for Scruton's dry, British wit as well as for the sheer breadth of intellectuals covered in his survey - --Against the Grain Blog

Here Scruton thoroughly and fairly debunks the ostentation, obfuscation, and terrible writing and downright deceitfulness of much of postwar Marxist-inspired philosophy. For Scruton the culprits are mainly from France and Germany-beginning with Sartre and carrying through to Foucault, Habermas, Althusser, Lacan, Deleuze, Gramsci, and Said-and he carries the attack forward to Badiou and Zizek. Even Galbraith and Dworkin take a few hits. Scruton writes from the perspective of an old-school conservative. His sympathies are with the virtues of the countryside and historically rooted associations of every sort, from churches and the US Constitution to volunteer fire departments, brass bands, and the local Grange. His personal point of view could be called sentimental...but his arguments against his foes are substantial and deep. Summing Up: Recommended. Upper-division undergraduates through faculty. - --CHOICE

Roger Scruton is currently Research Professor for the Institute for the Psychological Sciences where he teaches philosophy at their graduate school in both Washington and Oxford. He is a writer, philosopher and public commentator. He has specialised in aesthetics with particular attention to music and architecture. He engages in contemporary political and cultural debates from the standpoint of a conservative thinker and is well known as a powerful polemicist. He has written widely in the press on political and cultural issues.

1. Fools, Frauds and Firebrands: Thinkers of the New Left

3. Fools, Frauds and Firebrands: Thinkers of the New Left