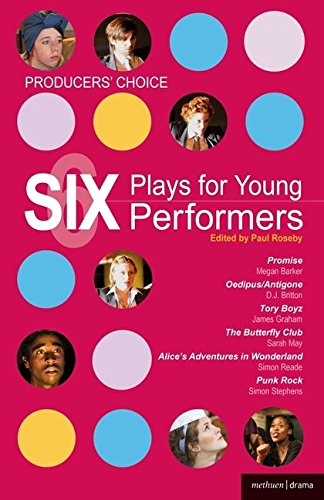 Producers' Choice: Six Plays for Young Performers showcases some of the best plays for young people produced by the Uk's leading theatre companies. The plays are ideal for young performers aged 13-25 and offer a diverse range of challenges, styles and subjects. The volume will prove essential for teachers and students of Drama and for youth drama groups.

Each play features production notes and the volume is introduced by Paul Roseby, Artistic Director of the National Youth Theatre. For schools, youth theatre groups and drama colleges this anthology of thematically and stylistically diverse plays will prove an invaluable resource.

Megan Barker's writing has been performed since 2000. As well as Promise/Adewidd (Sherman Cymru, 2008), her most recent work includes The Gingerbread House (The Courtyard, Hereford, 2009); Anaphylactic (Soho Theatre, London, 2009); Monaciello (Tron Theatre Company at Naples International Theatre Festival, 2009); Cria and Tongue Lie Tight/The Bad Drive Well (The Arches, Glasgow, 2008); and Pit (Traverse Theatre, Edinburgh, 2007). She often writes pieces to be performed in non-theatre spaces (such as a cloakroom, a public-toilet cubicle, an underground labyrinth, a farmyard or a multi-storey car park) and regularly designs her own work.