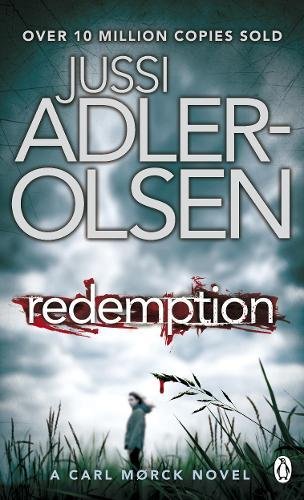 Redemption is the phenomenal third instalment in Jussi Adler-Olsen's internationally bestselling department Q series, which follows the Sunday Times smash hit Mercy and its sequel Disgrace. The prefect treat for all fans of the classic Scandinavian crime thriller in the vein of The Killing and Borgen!

'For those suffering withdrawals from The Killing' The Times

Two boys, brothers, wake tied and bound in a boathouse by the sea. Their kidnapper has gone, but soon he will return. Their bonds are inescapable. But there is a bottle and tar to seal it. Paper and a splinter for writing; blood for ink. A message begging for help . . .

*
Her husband will not tell the truth: where he goes, what he does, how long he will be away. For days on end she waits and when he returns she must endure his wants, his moods, his threats. But enough is enough. She will find out the truth, no matter the cost to him - or to herself.

*
In Copenhagen's cold cases division Carl Mørck has received a bottle. It holds an old and decayed message, written in blood. It is a cry for help from two boys. Is it real? Who are they and why weren't they reported missing? Can they possibly still be alive?

In 2013, the makers of the Stieg Larsson movies and The Killing will bring Jussi Adler-Olsen'sDepartment Q novels, including Mercy, Disgrace and Redemption, to the big screen.

'The new "it" boy of Nordic Noir' The Times

Jussi Adler-Olsen was born in Copenhagen and studied medicine, sociology, politics and film. He worked as a magazine editor and publisher before starting to write fiction. So far he has written three Department Q thrillers, which all hit the Danish bestseller lists on publication and stayed there ever since.

A weighty and disturbing novel. . .with an ingenuity as impressive as it is unnerving (Independent)

Buy Used
Condition: Good
May have some shelf-wear due to... Learn more about this copy

Book Description Condition: Good. May have some shelf-wear due to normal use. Seller Inventory # 0KVBKH00A2R5

Book Description -. Paperback. Condition: Very Good. Redemption (Department Q) This book is in very good condition and will be shipped within 24 hours of ordering. The cover may have some limited signs of wear but the pages are clean, intact and the spine remains undamaged. This book has clearly been well maintained and looked after thus far. Money back guarantee if you are not satisfied. See all our books here, order more than 1 book and get discounted shipping. Seller Inventory # 7719-9781405912471

Book Description Paperback. Condition: Very Good. The book has been read, but is in excellent condition. Pages are intact and not marred by notes or highlighting. The spine remains undamaged. Seller Inventory # GOR005726244

Book Description Paperback. Condition: Good. The book has been read but remains in clean condition. All pages are intact and the cover is intact. Some minor wear to the spine. Seller Inventory # GOR006245276

Book Description Penguin Books, 2013. Condition: Good. A+ Customer service! Satisfaction Guaranteed! Book is in Used-Good condition. Pages and cover are clean and intact. Used items may not include supplementary materials such as CDs or access codes. May show signs of minor shelf wear and contain limited notes and highlighting. Seller Inventory # 1405912472-2-4