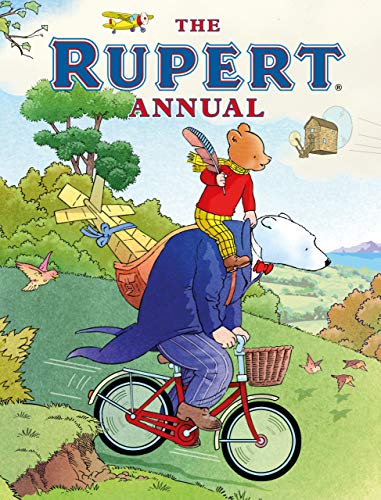 In this year’s annual, Rupert has many more adventures with a Skylark, a runaway kite and a windmill! Enjoy a brand-new story ‘Rupert and the Bearcycle’ originated and illustrated by Stuart Trotter plus much-loved favourite tales illustrated by John Harrold and Alfred Bestall.

Alfred Bestall was born in Burma in 1892. He served in the First World War and on returning became an illustrator for books and magazines. In 1935 he began writing and illustrating ‘Rupert’ stories for the Daily Express, which he did for 30 years, creating in the process perhaps the best-loved incarnation of the famous bear.

John Harrold was born in Glasgow in 1947 and studied drawing and painting at the Glasgow School of Art. In 1973 he was asked to illustrate "Lots of Fun to Cook with Rupert", and this led to the Daily Express asking him to draw some Rupert strips for the newspaper. John worked as the official Rupert artist for over 30 years.

Stuart Trotter is an experienced children's illustrator/storyteller. He has been the official Rupert artist since 2008.

Book Description Egmont, 2019. Hardcover. Condition: Very Good. The Rupert Annual 2020 (Annuals 2020) This book is in very good condition and will be shipped within 24 hours of ordering. The cover may have some limited signs of wear but the pages are clean, intact and the spine remains undamaged. This book has clearly been well maintained and looked after thus far. Money back guarantee if you are not satisfied. See all our books here, order more than 1 book and get discounted shipping. . Seller Inventory # 7719-9781405294447