Items related to Mr. Jelly and the Pirates (Mr Men) 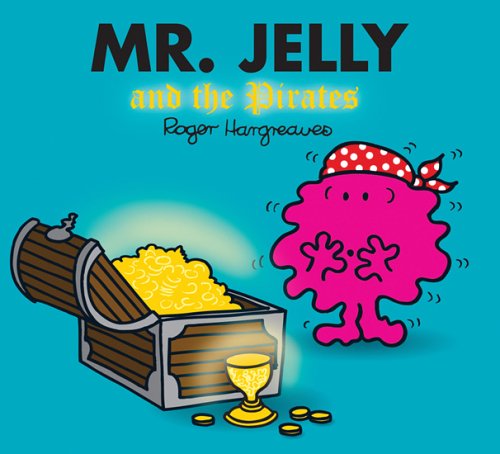 Mr Jelly is scared of everything. Then, one day, he plucks up the courage to go into the sea. But, how will he react when he meets some swashbuckling pirates?

It all started with a tickle. Roger Hargreaves’ son Adam asked him what a tickle looked like. In response, Roger drew a small orange man with extraordinarily long arms that could reach anywhere and tickle anyone. The idea that a tickle could be a character in its own right sparked an idea in Roger’s mind. Roger was a successful copywriter but he wanted to do something that would enable him to work from home and spend more time with his four children. He wondered if he could make a living writing and illustrating children’s books so he wrote the first Mr Men titles: and began looking for a publisher. The first published Mr Men: Mr. Tickle,. Mr. Greedy, Mr. Happy, Mr. Nosey, Mr Sneeze and Mr Bump.

The books were an instant hit and . Roger went on to create many more Mr Men and Little Miss characters. What Roger really wanted was to make children laugh. Mr Silly was his favourite Mr Men story and, according to his family, encapsulates his humour most closely. Sadly Roger passed away in 1988, but his son Adam took over the series, introducing new characters and exciting new adventures. Roger once said, ‘I feel very happy to think that when the Mr Men and Little Misses are 100 years old, their readers will always be five.’

Book Description Egmont Books Ltd. Paperback. Condition: Good. A copy that has been read, but remains in clean condition. All pages are intact, and the cover is intact. The spine may show signs of wear. Pages can include limited notes and highlighting, and the copy can include previous owner inscriptions. At ThriftBooks, our motto is: Read More, Spend Less. Seller Inventory # G1405225971I3N00

Book Description Egmont Books Ltd, 2006. Paperback. Condition: Used; Good. Dispatched, from the UK, within 48 hours of ordering. This book is in good condition but will show signs of previous ownership. Please expect some creasing to the spine and/or minor damage to the cover. Seller Inventory # CHL986772

Book Description Egmont Books Ltd, 2006. Paperback. Condition: Used; Good. Dispatched, from the UK, within 48 hours of ordering. This book is in good condition but will show signs of previous ownership. Please expect some creasing to the spine and/or minor damage to the cover. Damaged cover. The cover of is slightly damaged for instance a torn or bent corner. Seller Inventory # CHL4323312

Book Description Paperback. Condition: Very Good. The book has been read, but is in excellent condition. Pages are intact and not marred by notes or highlighting. The spine remains undamaged. Seller Inventory # GOR001354297

Book Description Egmont Books Ltd, 2006. Paperback. Condition: Used; Good. **Simply Brit** Shipped with Premium postal service within 24 hours from the UK with impressive delivery time. We have dispatched from our book depository; items of good condition to over ten million satisfied customers worldwide. We are committed to providing you with reliable and efficient service at all times. Seller Inventory # mon0000409852

Book Description Egmont Books Ltd, 2006. Paperback. Condition: Used; Good. **SHIPPED FROM UK** We believe you will be completely satisfied with our quick and reliable service. All orders are dispatched as swiftly as possible! Buy with confidence!. Seller Inventory # 1519745