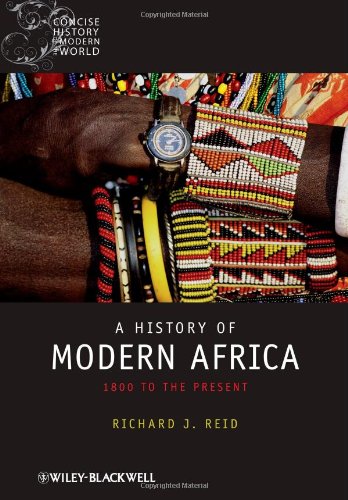 A History of Modern Africa recounts the full breadth of historical events that have shaped the last two centuries of the African continent.

"A number of introductions to African history aimed at the undergraduate and general reader have appeared in recent years. Reid′s text stands out among these as an invaluable teaching–tool due to its concise but appealing tone, its clear style, and its sensitive treatment of Africa′s often tumultuous past and contested present–day experiences. This is an excellent introduction to Africa for the student reader." (History , 2010)"This book stands as a remarkable achievement andwill be the choice volume on modern African history for some time to come." ( International Affairs, April 2010)

As the world′s second largest continent, Africa is home to a treasure trove of history. The geographical range of its environments and landscapes are only exceeded by and inextricably intertwined with the stunning diversity of its people, languages, and cultures. Much of Africa′s variety is reflected in the dynamic historical events that transpired over the last 200 years. During this period the continent′s population incorporated vastly different systems of polity, economies, and belief systems.


A History of Modern Africa recounts the full breadth of the last two centuries of African history. Author Richard Reid takes us on a thought–provoking and illuminating journey through the slave trade and colonization to the rise of Islam, struggles for independence, and beyond. Readers will see how Africa′s rich diversity began to re–emerge during the post–colonial era and discover the contrasting periods of despair and hope that emerged with it: the comforting dullness of Botswana and genocidal horrors of Rwanda; the bureaucratic routine of Ghanaian elections and violent political upheavals of Zimbabwe. Throughout these landmark events, Reid is ever sensitive to the richness and variety of Africa′s people and societies, cultures, and cosmology. A History of Modern Africa is an essential recounting of the turning points of Africa′s past and the myriad strands of African culture that will shape its future.