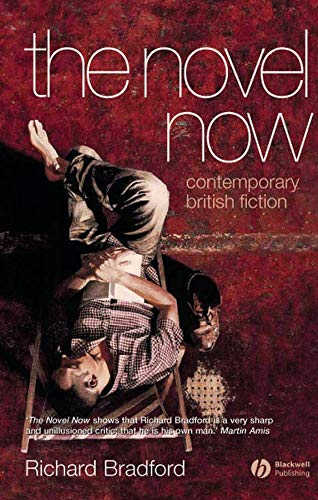 The Novel Now is an intelligent and engaging survey of contemporary British fiction. * Discusses familiar names such as Martin Amis, Ian McEwan, Salman Rushdie, and Angela Carter and compares them with more recent authors, including David Mitchell, Ali Smith, A.L. Kennedy, Matt Thorne, Nicola Barker, and Toby Litt * Incorporates original coverage of subgenres such as chick lit, lad lit, gay fiction, crime fiction, and the historical novel * Discusses the ways in which notions of regional identity and tribalist views have surfaced in UK and Irish fiction, and how post-Imperial sensibility has become a feature of the 'British' novel * Situates contemporary fiction within its socio-cultural and literary contexts.

A Choice Outstanding Academic Title for 2007


"This survey of a vast field is elegantly managed, with agreeable readings along the way."
The Guardian

"Bradford is formidable, bracing and wildly stimulating"
The Telegraph

"The Novel Now shows that Richard Bradford is a very sharp and unillusioned critic; that he is his own man."
Martin Amis

Praise for Richard Bradford's previous works:
For Lucky Him: The Life of Kingsley Amis
"sharp and convincing... written with magisterial skill"
The Daily Telegraph
"perceptive... intelligent... written with an unstrident ease and sympathy that would surely have pleased his subject" The Spectator

For First Boredom, Then Fear: The Life of Philip Larkin
"quite the best book [on him] yet to appear... a masterful analysis... Bradford is in such complete command of his subject matter, nothing escapes him. It is as if he has had access to Larkin's very thought processes. A great biography of a great artistic genius. Utterly magnificent"
The Daily Express
"extraordinary... quite the best thing to appear on Larkin in ages"
The London Evening Standard

In the last thirty years, major changes have taken place in literature. Reflecting the social, cultural, political, and psychological landscape of the twentieth century, British fiction has undergone a transformation; unearthing new writers, new genres, and new ideas. "The Novel Now" is an accessible and thorough account of the state of contemporary British fiction, from 1970 to present day. This book examines both emerging and celebrated authors, considering the work of rising literary stars and weighing their merit against more established authors. Through comparative assessment and reflection, the author takes a determined look at where literature has been, and where it is going. Incorporating coverage of sub genres such as "chick lit", "lad lit", crime fiction and the historical novel, this volume also examines the ways in which gender, sexuality, and sexual orientation have been addressed in fiction over the past three decades. Perfect for those who read with an analytical eye, as well as readers looking to understand and delight in a good narrative, "The Novel Now" is an intelligent and engaging survey of contemporary British fiction.