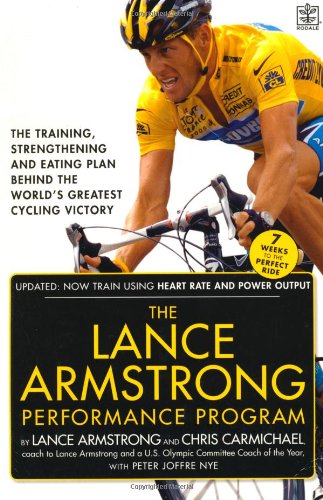 In 1999, two-time Olympian Lance Armstrong staged what many considered to be the most dramatic comeback in sports history, winning the Tour de France just 3 years after his body was ravaged by cancer. He went on to win the Tour de France a record-breaking 7 consecutive years, from 1999 to 2005, becoming an international icon and peerless legend in the cycling world. Behind this success is a multifaceted plan of strengthening, bicycling, and eating--so strong and so effective that it created history. With "The Lance Armstrong Performance Program," cyclists of every experience level can find the exercises, riding schedules, endurance builders, and mental tricks that brought Lance back to the pinnacle of cycling. These methods were crafted by his coach, Chris Carmichael, the U.S. Olympic Committee's coach of the year in 1999, and have been refined by Chris and Lance during their years of working together. Rich with advice and new personal anecdotes on making a comeback in 2009 from both Lance and his coach, "The Lance Armstrong Performance Program" shows readers how to reach their peak riding capacity in just seven weeks. Whether novices or pros, readers can now ride the same path as Lance to achieve their personal best.

A revised edition of the training, strengthening and eating plan behind the world's greatest cycling victory

A TRAINING PROGRAM SO SIMPLE, IT'S LIKE RIDING A BICYCLE...WITH THE BEST IN THE WORLD!

In 1999 the world watched spellbound as Lance Armstrong achieved one of the most dramatic comebacks in sports history, winning the grueling Tour de France just three years after being diagnosed with advanced testicular cancer. Lance's return road to glory took courage, determination, and a top-notch training program. Now Lance's winning strategies-- developed with coach Chris Carmichael-- can be yours, too! Whether you're a cycling novice or a competitive racer, The Lance Armstrong Training Program will teach you how to:

* find the right bike for your body
* know when to brake (only as a last resort!)
* corner, climb, and descend like a pro
* develop your explosive power to sprint
* incorporate cross-training into your schedule
* build necessary mental toughness...
* and much more!

Simple and focused, Lance's proven program will transform you into the rider you want to be-- in just seven weeks!

About the Author
Lance Armstrong was ranked the #1 cyclist in the world in 1996. After his thrilling comeback victory at the1999 Tour de France, he was named the 1999 Wide World of Sports Athlete of the Year and The Most Fascinating Person of 1999 by Barbara Walters.

Chris Carmichael has been Lance Armstrong's personal coach since the early 1990s. A former world-class cyclist, he was named the 1999 Coach of the Year by the United States Olympic Committee.

Peter Joffrey Nye is a cyclist and professional writer.