Items related to Armed Struggle: The History of the IRA

English, Richard Armed Struggle: The History of the IRA

Armed Struggle: The History of the IRA 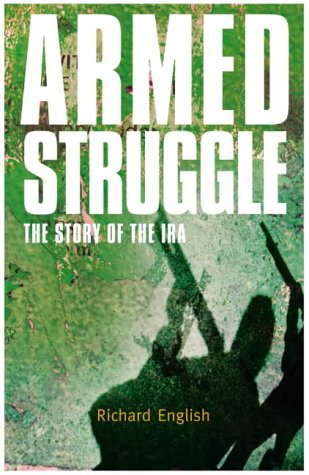 The fullest, most original and authoritative treatment of one of the world's leading revolutionary movements, the IRA, from a leading young historian of Ireland.Richard English's book is a detailed history and analysis of the IRA from the dramatic events of the Easter Rising in 1916 to the ongoing peace process. In it he examines the bitter guerrilla war of 1919-21, the partioning of Ireland in the 1920s and the Irish Civil War of 1922-23. Here, too, are the IRA campaigns in Northern Ireland and Britain during the 1930s, 1940s, 1950s and 1960s. He explains precisely how the Provisionals were born out of the turbulence generated by the 1960s civil rights movement. And he examines the escalating violence; the split in the IRA that produced the Provisionals; the introduction of internment in 1971 and the tragedy of Bloody Sunday in 1972. He then details the prison war over political status, culminating in the Hunger Strikes of the early 1980s, moves on to describe the Provisionals' subsequent emergence as a more commitedly political force and concludes with the ongoing peace process. Whereas previous books on the IRA have offered sensationalized allegations or romanticised celebrations, Professor English offers a dazzling account of the motives, actions and continuing consequences of the IRA and has produced a work of history of major importance.

...at its most compulsive in its sympathetic but relentless exploration of the arguments and logic that led the IRA and Sinn Fein to their present position. -- Roy Foster, The Times 02 April 2003

...the best account by far of the twentieth century's longest war... If you want to know where the IRA came from and how they think, this is the book to read. -- Peter Hart (Author of THE IRA AND ITS ENEMIES), January 2003

...work distinguished ...by a deep understanding of the mentalities that drive Republican violence, as well as a sensitivity to its cost. -- Professor George Boyce

The most remarkable thing about Armed Struggle is the degree of objectivity English attains... an impressive achievement. -- Independent, April 2003

What impressed me most was the way Richard English managed to present such an historical and contradictory mess with such clarity and fairness. -- Roddy Doyle, January 2003

The most comprehensive, most original and authoritative treatment of the IRA with a new conclusion to bring the book completely up to date

Armed Struggle: The History of the IRA

Armed struggle: the history of the IRA [Hardcover] English, Richard