Various Joker Death of the Family TP (The New 52)

Joker Death of the Family TP (The New 52) 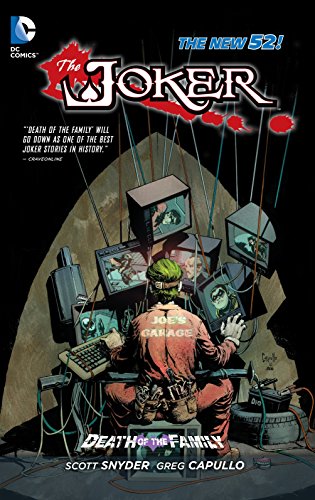 "Disturbing, violent, oddly psychological and insanely wonderful." - USA WEEKEND"If you liked "The Dark Knight," Joker is a must-have for your bookshelf." - MTV.com"Terrific and disturbing." - THE VILLAGE VOICE"One of the best written and illustrated comics to come out of a major publishing house this year." - THE SAN JOSE MERCURY NEWS

Scott Snyder is the bestselling and award-winning writer of Batman, American Vampire and Swamp Thing as well as the short story collection Voodoo Heart. He teaches writing at Sarah Lawrence College, NYU and Columbia University. He lives on Long Island with his wife, Jeanie, and his sons Jack and Emmett. He is a dedicated and un-ironic fan of Elvis Presley. Kyle Higgins is a New York Times Best Selling writer whose work includes BATMAN: GATES OF GOTHAM, Supreme Power, and DEATHSTROKE. After spending two years at the University of Iowa, Kyle transferred to Chapman University where he co-wrote and directed a superhero noir titled The League, about the 1960's superhero labor union of Chicago. The film opened doors at Marvel Comics, where Kyle co-wrote his first two books with Alec Siegel (Captain America Theater Of War: Prisoners Of Duty, and Avengers Origins: The Vision). Kyle is also a co-writer of The Nightrunner (with David Hine), whose story was featured on The Daily Show with John Stewart. At present, Kyle is helming NIGHTWING as part of DC's The New 52.