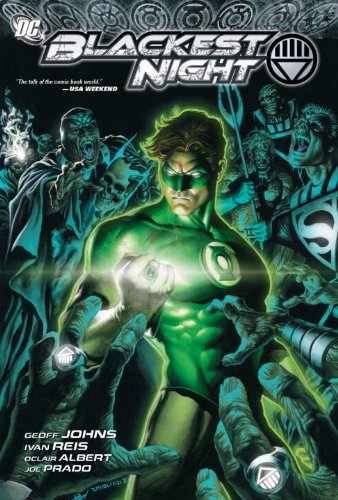 Throughout the decades, death has plagued the DC Universe and taken the lives of heroes and villains alike. But to what end? As the War between the different colored Lantern Corps rages on, the prophecy of the Blackest Night descends and it's up to Hal Jordan and the Green Lantern Corps to lead DC's greatest champions in a battle to save the Universe from an army of undead Black Lanterns made up of fallen Green Lanterns and DC's deceased heroes and villains.

This collection of the best-selling epic is the culmination of the events that Geoff Johns has been leading to since he relaunched the Green Lantern franchise in 2006!

"If you've read a superhero comic book published by DC Comics within the last few years, and were completely blown away by it, there's a good chance that it was something written by Geoff Johns."-- Washington Examiner"The talk of the comic book world."-- USA Weekend