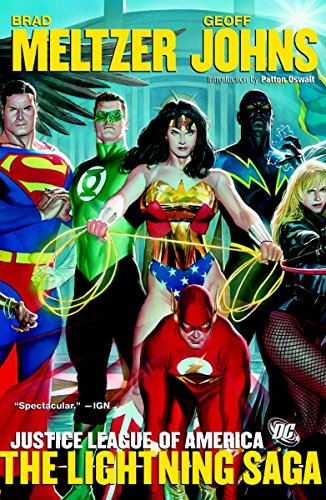 Two super-teams join forces in this volume collecting JUSTICE LEAGUE OF AMERICA #0 and #8-12 and JUSTICE SOCIETY OF AMERICA #5-6! The JLA has discovered the presence of several members of the Legion of Super-Heroes in the present!

"In his run on DC's Justice League of America, writer Brad Meltzer has assembled one of the most eclectic, interesting incarnations of the iconic DC team."

"Meltzer cleverly draws upon forty years of DC history to both reconstruct the JLA and richly deconstruct its cornerstone Superman/Batman/Wonder Woman axis. Grade: A."

"Meltzer delivers a script with the same polish and suspense he brought to the hugely successful Identity Crisis, bringing humanity and personality to the many members of the League that few writers in mainstream comics are capable of delivering... A satisfying and meaty story that should thrill new and old readers equally. Grade: A."

Brad Meltzer is the #1 New York Times bestselling author of The Inner Circle and The Book of Fate, as well as the bestsellers The Tenth Justice, Dead Even, The First Counsel, The Millionaires, The Zero Game, and The Book of Lies. He is also the author of the nonfiction bestsellers, Heroes For My Son and Heroes For My Daughter, collecting heroes from Jim Henson, to Rosa Parks, to Mr. Rogers. Brad is also the host of the History Channel TV show, Brad Meltzer's Decoded, one of the co-creators of the TV show Jack & Bobby and is the #1 selling author of the critically-acclaimed comic books, IDENTITY CRISIS and JUSTICE LEAGUE OF AMERICA, for which he won the prestigious Eisner Award.