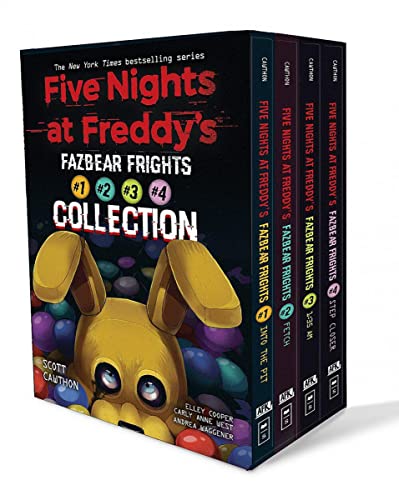 Book Description Scholastic US, United States, 2020. Paperback. Condition: New. Language: English. Brand new Book. The first four Five Nights at Freddy's: Fazbear Frights short story collections all in one box set! These four short story collections - straight from the mind of Five Night's at Freddy's creator Scott Cawthon - are full of original, spine-tingling tales sure to have even the bravest readers shivering with fear. Into the Pit: Oswald wishes his summer wasn't so boring, Sarah wishes to be beautiful, and Millie wishes she could just disappear from the face of the earth. But in the twisted world of Five Nights at Freddy's, their hearts' deepest desires have an unexpected cost. Fetch: Greg decides to put the controversial science he's been studying to the test. Alec launches a master plot to expose his golden sister for the spoiled brat he knows she is. And Oscar, ever the miniature grown-up his mom needs him to be, decides to take something he wants . even though he knows it's wrong. But as these three will learn, control is a fragile thing in the sinister world of Five Nights at Freddy's. 1:35AM: Delilah escapes deeper into her dreams each night, in desperate need of a wake-up call. Stanley is newly dumped, stuck in a dead-end job for a mysterious employer, and unable to connect with anyone. And Devon, abandoned by his dad and ignored by his mom, can't understand why love and friendship come so easily to everyone except him. Unfortunately, in the callous world of Five Nights at Freddy's, it's always in the depths of loneliness that evil creeps in. Step Closer: Isolation can open up a void. Pete lashes out at his younger brother in the wake of his parents' divorce, falling prey to a gruesome curse. Kasey struggles with the lengths she'll go to survive on the streets after stealing a pair of unusual novelty glasses. Samantha and her sister, Susie, struggle to exist side by side, desperate to connect after a horrific tragedy. But in the grim world of Five Nights at Freddy's, empty feelings often attract hungry monsters. Seller Inventory # AAC9781338715804