Items related to The Satires of Juvenal: With Prolegomena and English...

Juvenal, Juvenal The Satires of Juvenal: With Prolegomena and English Notes (Classic Reprint)

The Satires of Juvenal: With Prolegomena and English Notes (Classic Reprint) 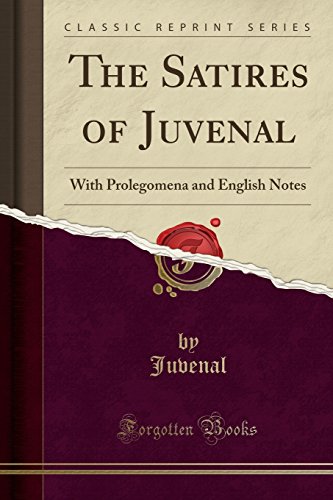 Excerpt from The Satires of Juvenal: With Prolegomena and English Notes

Subsequently to his school training, it is most likely that be devoted himself to the study of rhetoric, not with any View to making a professional use of it, but purely as a good means of intellectual discipline. From a.d. 70 to 94 during the reign of Vespasian and the early part of that of Domitian - he probably did not -write at all. It was in the year 94 that he was banished to Egypt, owing to his having, for some reason or other of which we know nothing, offended the prince - a not very difficult thing in those days. In the year 96 Domitian was killed, and Nerve succeeded him. J uvenal returned to Rome, and about five years afterwards gave to the world a volume of Satires which may probably have been conceived, if they were not executed, during his compulsory absence from the Roman capital. From that time till the end of Trajan's reign, he probably wrote continuously. That the date of his later compositions was at any rate not earlier than this period may be argued from the allusion in the fifth Satire to the banishment of Marius Prisons, which occurred about the commencement of the second century, when Trajan was still upon the throne. How long he lived, and where he died, is all mere matter of conjecture. Mr. Macleane, who is one of the few classical critics that have constructed a life of Juvenal purely from the internal evidence of his writings, has thought it probable that he did not die before the accession of Antoninus Pius in a.d. 138, at which time he would have been eighty years of age.

`I wholeheartedly welcome the publication of this book. It will be immensely helpful to those of us who have to teach Roman satire in translation and the general reader will find it a reliable and readable version of an author who still has much to say to us.'Raymond Astbury, University College, Dublin

`The translation itself goes a long way towards catching J.'s mixture of rhetoric and wit. It is lively and taut ... translation is excellent, not only the best available in English but also good to read, no bad thing as most of its readers will be Latinless.' F. Jones, University of Liverpool, The Classical Review, Vol. XLII, 1992

This volume presents a new commentary on the first book of satires of the Roman satirist Juvenal. Susanna Morton Braund situates Juvenal within the genre of satire and demonstrates his originality in creating an angry character who declaims in the 'grand style'. The essays on each poem present the first integrated reading of these Satires as an organic structure.