Items related to A Book of Homage to Shakespeare

Gollancz, Israel A Book of Homage to Shakespeare 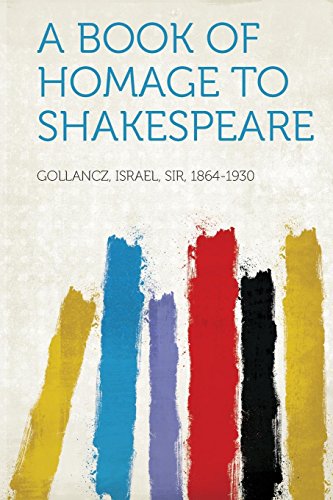 Unlike some other reproductions of classic texts (1) We have not used OCR(Optical Character Recognition), as this leads to bad quality books with introduced typos. (2) In books where there are images such as portraits, maps, sketches etc We have endeavoured to keep the quality of these images, so they represent accurately the original artefact. Although occasionally there may be certain imperfections with these old texts, we feel they deserve to be made available for future generations to enjoy.

Sir Israel Gollanz was a literary scholar and chair of English language and literature at King's College, London from 1903 until 1930. He was also one of the founders and original fellows of the British Academy. Gollancz was the general editor of the Temple Shakespeare, the Temple Classics, the King's Library, the King's Novels, the Medieval Library, and the Shakespeare Survey. Gollancz won wide recognition for his scholarship both at home and abroad, and was knighted in 1919. He died at his home in June 1930. Gordon McMullan is Professor of English at King's College London and Director of the London Shakespeare Centre. He is a critic and an editor with a focus on Shakespeare and early modern drama. He is a general editor of the Arden Early Modern Drama series and author of Shakespeare and the Idea of Late Writing: Authorship in the Proximity of Death.