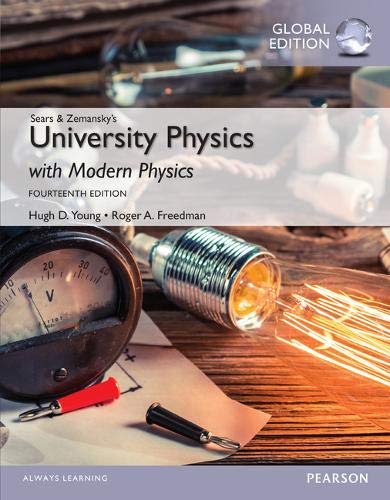 For courses in calculus-based physics.

The benchmark for clarity and rigor, influenced by the latest in education research.

Since its first edition, University Physics has been revered for its emphasis on fundamental principles and how to apply them. This text is known for its clear and thorough narrative, as well as its uniquely broad, deep, and thoughtful sets of worked examples that provide students with key tools for developing both conceptual understanding and problem-solving skills.

The Fourteenth Edition improves the defining features of the text while adding new features influenced by education research to teach the skills needed by today’s students. A focus on visual learning, new problem types, and pedagogy informed by MasteringPhysics metadata headline the improvements designed to create the best learning resource for physics students.

This package includes MasteringPhysics —the leading online homework, tutorial, and assessment system, designed to improve results by engaging students before, during, and after class with powerful content. Instructors ensure students arrive ready to learn by assigning educationally effective content before class and encourage critical thinking and retention with in-class resources such as Learning Catalytics.

MasteringPhysics should only be purchased when required by an instructor. Please be sure you have the correct ISBN and Course ID. Instructors, contact your Pearson representative for more information.

Hugh D. Young is Emeritus Professor of Physics at Carnegie Mellon University in Pittsburgh, PA. He attended Carnegie Mellon for both undergraduate and graduate study and earned his Ph.D. in fundamental particle theory under the direction of the late Richard Cutkosky. He joined the faculty of Carnegie Mellon in 1956 and has also spent two years as a Visiting Professor at the University of California at Berkeley.

Prof. Young’s career has centered entirely around undergraduate education. He has written several undergraduate-level textbooks, and in 1973 he became a co-author with Francis Sears and Mark Zemansky for their well-known introductory texts. With their deaths, he assumed full responsibility for new editions of these books until joined by Prof. Freedman for University Physics.

Prof. Young is an enthusiastic skier, climber, and hiker. He also served for several years as Associate Organist at St. Paul’s Cathedral in Pittsburgh, and has played numerous organ recitals in the Pittsburgh area. Prof. Young and his wife Alice usually travel extensively in the summer, especially in Europe and in the desert canyon country of southern Utah.

At UCSB, Dr. Freedman has taught in both the Department of Physics and the College of Creative Studies, a branch of the university intended for highly gifted and motivated undergraduates. He has published research in nuclear physics, elementary particle physics, and laser physics. In recent years, he has helped to develop computer-based tools for learning introductory physics and astronomy. When not in the classroom or slaving over a computer, Dr. Freedman can be found either flying (he holds a commercial pilot’s license) or driving with his wife, Caroline, in their 1960 Nash Metropolitan convertible.

A. Lewis Ford is Professor of Physics at Texas A&M University. He received a B.A. from Rice University in 1968 and a Ph.D. in chemical physics from the University of Texas at Austin in 1972. After a one-year postdoc at Harvard University, he joined the Texas A&M physics faculty in 1973 and has been there ever since. Professor Ford’s research area is theoretical atomic physics, with a specialization in atomic collisions. At Texas A&M he has taught a variety of undergraduate and graduate courses, but primarily introductory physics.