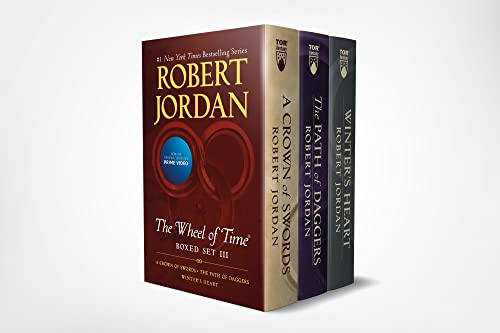 Book Description Mass Market Paperback. Condition: new. Mass Market Paperback. The Wheel of Time Premium Boxed Set III includes mass market editions of volumes seven, eight, and nine of The Wheel of Time(R), Robert Jordan's internationally bestselling fantasy series, now available in a premium mass market edition with striking new cover art. The Wheel of Time (R) is a PBS Great American Read Selection Now in development for TV Since its debut in 1990, The Wheel of Time by Robert Jordan has captivated millions of readers around the globe with its scope, originality, and compelling characters. The Wheel of Time turns and Ages come and pass. What was, what will be, and what is, may yet fall under the Shadow. Let the dragon ride again on the winds of time. This boxed set contains: Book Seven: A Crown of Swords Book Eight: The Path of Daggers Book Nine: Winter's Heart *** TV series update: Sony will produce along with Red Eagle Entertainment and Radar Pictures. Rafe Judkins is attached to write and executive produce. Judkins previously worked on shows such as ABC's Agents of SHIELD , the Netflix series Hemlock Grove , and the NBC series Chuck . Red Eagle partners Rick Selvage and Larry Mondragon will executive produce along with Radar's Ted Field and Mike Weber. Darren Lemke will also executive produce, with Jordan's widow Harriet McDougal serving as consulting producer. -- Variety The Wheel of Time (R) New Spring: The Novel #1 The Eye of the World #2 The Great Hunt #3 The Dragon Reborn #4 The Shadow Rising #5 The Fires of Heaven #6 Lord of Chaos #7 A Crown of Swords #8 The Path of Daggers #9 Winter's Heart #10 Crossroads of Twilight #11 Knife of Dreams By Robert Jordan and Brandon Sanderson #12 The Gathering Storm #13 Towers of Midnight #14 A Memory of Light By Robert Jordan and Teresa Patterson The World of Robert Jordan's The Wheel of Time By Robert Jordan, Harriet McDougal, Alan Romanczuk, and Maria Simons The Wheel of Time Companion By Robert Jordan and Amy Romanczuk Patterns of the Wheel: Coloring Art Based on Robert Jordan's The Wheel of Time Shipping may be from multiple locations in the US or from the UK, depending on stock availability. Seller Inventory # 9781250256263