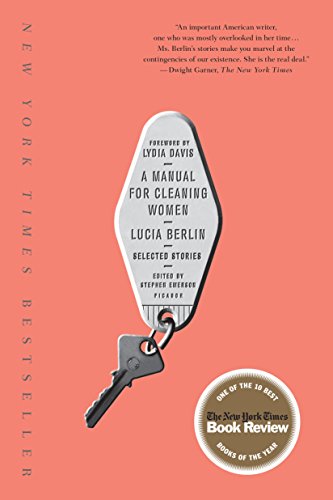 A Manual for Cleaning Women compiles the best work of the legendary short-story writer Lucia Berlin. With the grit of Raymond Carver, the humor of Grace Paley, and a blend of wit and melancholy all her own, Berlin crafts miracles from the everyday, uncovering moments of grace in the Laundromats and halfway houses of the American Southwest, in the homes of the Bay Area upper class, among switchboard operators and struggling mothers, hitchhikers and bad Christians.

Readers will revel in this remarkable collection from a master of the form and wonder how they'd ever overlooked her in the first place.

"In A Manual for Cleaning Women we witness the emergence of an important American writer, one who was mostly overlooked in her time. Ms. Berlin's stories make you marvel at the contingencies of our existence. She is the real deal. Her stories swoop low over towns and moods and minds." --Dwight Garner, The New York Times

"Some short story writers-Chekhov, Alice Munro, William Trevor-sidle up and tap you gently on the shoulder: Come, they murmur, sit down, listen to what I have to say. Lucia Berlin spins you around, knocks you down and grinds your face into the dirt. You will listen to me if I have to force you, her stories growl. But why would you make me do that, darlin'? . . . Berlin's stories are full of second chances. Now readers have another chance to confront them: bits of life, chewed up and spat out like a wad of tobacco, bitter and rich." --Ruth Franklin, The New York Times Book Review

"[Lucia Berlin] might be the most interesting person you've never met . . . Life (and a long battle with alcohol) prevented her from publishing regularly, but it's all here in 43 autobiographical stories that read like one long, fascinating conversation full of switchbacks and revelations. Every detox ward, dingy Laundromat, and sunbaked Mexican palapa spills across the page in sentences so bright and fierce and full of wild color that you'll want to turn each one over just to see how she does it. And then go back and read them all again. A." --Leah Greenblatt, Entertainment Weekly

"The vivacity, humor, sorrow, pragmatism and sheer literary star power that fill the 43 stories collected in A Manual For Cleaning Women hit with such immediacy and vigor that it seems unbelievable that their author, Lucia Berlin, died in 2004, at the age of 68, before most of us ever knew about her. How a writer with this much appeal slipped under the radar is unfathomable, though sexism may be involved. Anyway, thank heavens it's over. Anyone who loves the stories of Grace Paley and Lorrie Moore will find another master of the form here. . . Just go get the book and start reading them for yourself." --Marion Wink, Newsday

"Berlin's tales of addiction and violence, formally unpredictable and drolly grotesque, defy our expectations for working-class fiction . . . If you aren't familiar with Berlin, now's the time to get acquainted . . . A Manual for Cleaning Women brings together 43 of the unconventional, unnerving stories Berlin wrote over the course of thirty years . . . offer[ing] unusually detailed portraits of working-class lives . . . Allusive and lyrical, her writing looks more modernist than minimalist . . . [Berlin] didn't generalize or ironize working-class experience; she instead presented her neighbors in all their compelling specificity . . . What this writing affirms is the beautiful, broken human body as well as Berlin's rightful place in the canon of American short fiction." --Maggie Doherty, New Republic

"Berlin was underrecognized during her life-she died in 2004 at age 68-but A Manual for Cleaning Women, a collection of her work edited by Stephen Emerson and with a foreword by Lydia Davis, should correct that. These 43 stories, mostly published from the 1960s to the '80s, illuminate a gritty world where pink-collar workers seek illegal abortions, endure unwanted caresses from strange men and scavenge for pennies to nurse their addictions . . . Infused with Berlin's caustic humor and a sense of self-discovery . . . the most touching stories have fun with the foreboding." --Eliana Dockterman, Time

"A writer's writer whose posthumous, highly semiautobiographical collection will catapult her into a household name. Women who behave badly oscillate beautifully between funny ha-ha and funny-sad in these perfectly clipped, nuanced stories." --Steph Opitz, Marie Claire

"Lucia Berlin has long been overlooked as one of America's best short story writers, and it only takes readers the first couple of pages to recognize that . . . Reminiscent of Raymond Carver with a dash of survivor's humor, which makes even the bleakest tales thoroughly enjoyable." --Joseph Errico, Nylon

"Begin reading a Berlin short story and you know immediately that you are in the presence of a unique and searing literary force . . . This revelatory volume now brings her forward to stand beside her peers, including Grace Paley . . . Berlin is exceptionally attuned to the randomness of life, its pains and pleasures, our vulnerability and resiliency . . . Berlin unflinchingly strips bare casual and catastrophic cruelty and injustice, dramatizing, as one narrator puts it, "times of intense technicolor happiness and times that were sordid and frightening." An essential collection of jazzy, jolting, incisive, wryly funny, and keenly compassionate, virtuoso tales." --Donna Seaman (starred review), Booklist

"A posthumous collection of stories, almost uniformly narrated by hard-living women, that makes a case for the author as a major talent . . . The prevailing sensibility of this book, collecting 43 of the 76 stories Berlin published, is cleareyed and even comic in the face of life hitting the skids. The title story, for instance, balances wry commentary about housecleaning work ('never make friends with cats') and deadpan observation ('I clean their coke mirror with Windex') with a sad, thrumming back story . . . Berlin's skill at controlling the temperature of a story is best displayed in her most emotionally demanding material. In 'Tiger Bites, ' narrated by an El Paso woman who heads to Juarez for an illegal abortion, the pain of her experience and the pieties of her family at home collide. And 'Mijito, ' which deserves to be widely anthologized, exposes how an immigrant woman's best intentions to care for her ailing son are easily derailed by circumstance and obligation. A testament to a writer whose explorations of society's rougher corners deserve wider attention." --Kirkus Review (starred)

"[Lucia Berlin] may just be the best writer you've never heard of . . . Imagine a less urban Grace Paley, with a similar talent for turning the net of resentments and affections among family members into stories that carry more weight than their casual, conversational tone might initially suggest . . . Berlin's offbeat humor, get-on-with-it realism, and ability to layer details that echo across stories and decades give her book a tremendous staying power . . . [A Manual for Cleaning Women] goes a long way toward putting Berlin, who died in 2004, back in the public eye." --Publishers Weekly, starred review

"Here's prose to fall hard for, from the first beautifully candid paragraph to the last. As Berlin's characters confide in the reader and in each other, somehow, through the "ifs" and "buts," laundry and flower clocks, grace and catastrophe, a mesh is woven that captures life itself. I'm bowled over by her." --Helen Oyeyemi

"What a thrilling, welcome discovery this collection is. These are stories to beguile, fascinate and surprise. You are never sure what will happen next. As soon as I'd finished this book, I had to turn back to the beginning and start again." --Maggie O'Farrell

"Berlin's literary model is Chekhov, but there are extra-literary models too, including the extended jazz solo, with its surges, convolutions, and asides. This is writing of a very high order." --August Kleinzahler on Where I Live Now, London Review of Books

"This remarkable collection occasionally put me in mind of Annie Proulx's Accordion Crimes, with its sweep of American origins and places. Berlin is our Scheherazade, continually surprising her readers with a startling variety of voices, vividly drawn characters, and settings alive with sight and sound. " --Barbara Barnard on Where I Live Now, American Book Review

"[The stories] are set in the places Berlin knows best: Chile, Mexico, the Southwest and California, and they have the casual, straightforward, immediately intimate style that distinguishes her work . . . [They] are told in an easy conversational voice and they go from start to finish with a swift and often lyrical economy . . . Berlin's stories capture and communicate these moments of grace and cast a lovely, lazy light that lasts. She is one of our finest writers and it is a pleasure to see her represented at the height of her powers." --Molly Giles on So Long, San Francisco Chronicle

"Marvelous . . . Berlin's beautiful, rangy prose builds into unpredictable shapes that speak of the sprawling rural and urban western and South American landscapes that fueled her imagination . . . Full of humor and tenderness and emphatic grace . . . Those not lucky enough to have yet encountered the writing of Lucia Berlin are in for some high-grade pleasure when they make first contact." --Laird Hunt, The Washington Post

"By the last line, each story reveals itself to have been microscopically crafted . . . As a writer, [Berlin is] like the genius in the movies who stares at a huge blackboard crisscrossed with equations, scrawls a few characters, corrects a subscript, and solves the big problem that's stumped the best minds in the field . . . It's as if Berlin had looked around and seen an empty space in fiction that no one else had noticed, so she decided to fill it with as much life as it could hold-and it turned out it could hold all of it." --Michael Robbins, Chicago Tribune

"Berlin's stories . . . alternate between light and dark so seamlessly and suddenly that a certain emotion barely fades before you feel something abruptly different . . . The result is a fictional world of wide-ranging impact, a powerful chiaroscuro that manages to encompass the full spectrum of human experience . . . [Berlin] deserves to be ranked alongside Alice Munro, Raymond Carver, and Anton Chekhov. She excels at pacing, structure, dialogue, characterization, description, and every other aspect of the form." --Nick Romeo, The Boston Globe

A chance to be let in on a great American secret

Book Description Paperback. Condition: New. Reprint. Language: English. Brand new Book. One of The New York Times Book Review's Ten Best Books of 2015 One of Jezebel's Favorite Books of 2016 A Manual for Cleaning Women compiles the best work of the legendary short-story writer Lucia Berlin. With the grit of Raymond Carver, the humor of Grace Paley, and a blend of wit and melancholy all her own, Berlin crafts miracles from the everyday, uncovering moments of grace in the Laundromats and halfway houses of the American Southwest, in the homes of the Bay Area upper class, among switchboard operators and struggling mothers, hitchhikers and bad Christians. Readers will revel in this remarkable collection from a master of the form and wonder how they'd ever overlooked her in the first place. Perhaps, with the present collection, Lucia Berlin will begin to gain the attention she deserves. -Lydia Davis. Seller Inventory # LIB9781250094735

4. A Manual for Cleaning Women: Selected Stories (Paperback or Softback)