Items related to As a Man Grows Older

As a Man Grows Older 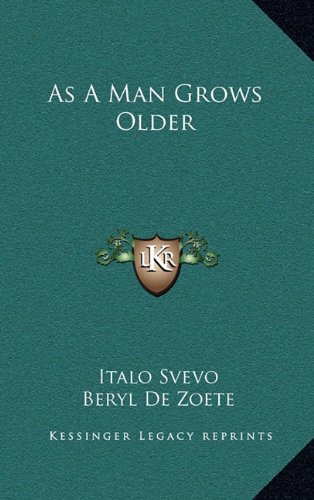 Svevo has the capacity so rare as to be almost unknown in the English novel of handling emotional relationships with a combined tenderness, humor and realism .He writes about characters and situations of universal application.
The Times Literary Supplement"

Svevo has the capacity--so rare as to be almost unknown in the English novel--of handling emotional relationships with a combined tenderness, humor and realism....He writes about characters and situations of universal application.
-- The Times Literary Supplement

Italo Svevo (1861-1928), whose given name was Ettore Schmitz, was born in Trieste into a Jewish family of Italian and German descent-as his pseudonym reflects. Svevo published two novels in the 1890s, A Life and As a Man Grows Older, but after they were dismissed by critics and ignored by the public, he abandoned literature and went to work in his father-in-law's paint business. He returned to writing only after the young man whom he had hired to tutor him in English, James Joyce, asked to see his novels and expressed admiration for them. With Joyce's support, he published The Confessions of Zeno in 1923 to international acclaim. Svevo had finished a new book (The Tale of the Good Old Man and of the Lovely Young Girl) and was at work on another when he was killed in a car crash in 1928.