Items related to Essays on the philosophy of theism Volume 1

Ward, Wilfrid Philip Essays on the philosophy of theism Volume 1

Essays on the philosophy of theism Volume 1 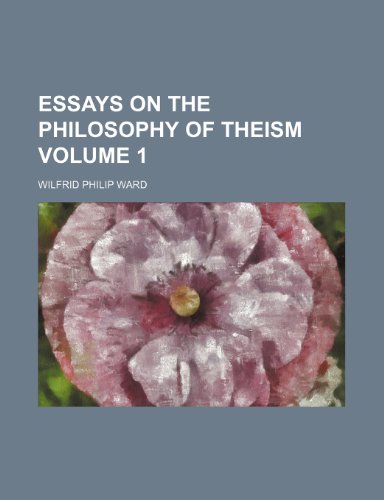 This historic book may have numerous typos and missing text. Purchasers can download a free scanned copy of the original book (without typos) from the publisher. Not indexed. Not illustrated.1884 Excerpt: ... II. MR. MILL'S DENIAL OF NECESSARY TRUTH.' Mr. Mill has set an excellent example, in singling out an individual writer (Sir W. Hamilton) as his special opponent. Even those philosophers who are most nearly agreed, differ from each other so considerably in their exposition of doctrine, that an antagonist who attempts to answer them all directly is unable to exhibit the full strength of his case. If he replies to them successively, he becomes tedious; if he encounters them collectively, he must use much vagueness and indistinctness of expression. A far more satisfactory issue will be reached, if he singles out for conflict one in particular; nor will he thereby be prevented from adding such supplementary remarks as may be necessary for a complete exposition of his view. All which he need consider is, that the particular opponent whom he selects may both be, and receive general recognition as being, a worthy representative of the adverse school. If Mr. Mill did well in this respect by choosing Sir W. Hamilton, much more shall we do well by choosing Mr. Mill. In one respect, it is both easier and more hopeful to deal with phenomenists than with their extreme opposites, the transcendental pantheists. Phenomenists appeal honestly An Examination of Sir W. Hamilton's Philosophy. By John Stuart Mill. Third Edition. London: Longmans. A Systtm of Logic, Iiutiocinatire and Inductive. By John Stuart Mill. Seventh Edition. London: Lougmans. and consistently to the one legitimate standard, the observed facts of human thought; and there is therefore a really appreciable prospect of conducting our argument against them to some definite result. But Mr. Mill in particular is a more satisfactory opponent than any other of his school, in proportion as, more distinctly than any...