Items related to The History of English Law Before the Time of Edward...

Sir Frederick Pollock The History of English Law Before the Time of Edward I; Volume I Volume 1

The History of English Law Before the Time of Edward I; Volume I Volume 1 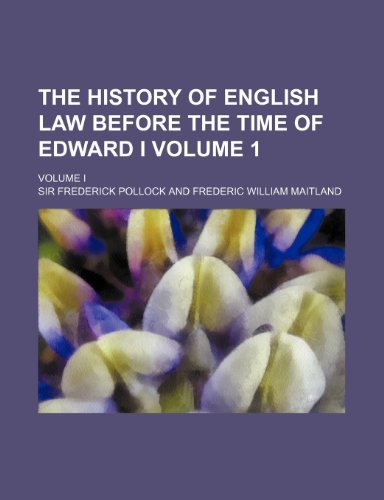 This historic book may have numerous typos and missing text. Purchasers can download a free scanned copy of the original book (without typos) from the publisher. Not indexed. Not illustrated. 1895 edition. Excerpt: ...(attornat) the tenant to the new lord, or attorns the service and homage to the new lord. " Bracton, f. 81 b-82 b. See also Y. B. 32-3 Edw. I. p. 43. ' BractoD, f. 80 b, 81 b, 382, § 5. However if the lord was so poor that he was unable to warrant the tenant, he was allowed to disclaim the seignory and the tenant then held of the next lord in the ascending scale; Note Book, pi. 563, 674. 4 In 1130 B. de C. fined to the king ' ut Symon de Belcampo dominas sans lion daret servitium snum nisi concessu suo'; Pipe Boll, 31 Hen. I. p. 62. reason to suppose that the tenant would object to recognising a new lord, then a fine would be levied, and the tenant would be called on by a writ known as Per quae servitia to show cause why he should not be attorned1. Fines transferring services are quite common; the subject-matter of the transfer is usually described as the service, or the homage and service of such an one2. It would be a great mistake to suppose that the elaborate and lofty feudal ladders that we find existing in the thirteenth century, had been always, or even generally, constructed by the process of adding new rungs at their nether end; new rungs were constantly inserted in their middles. § 10. Aids. Dntyof The duties implied in the relation between man and lord are but slowly developed and made legal duties. There long remains a fringe of vague obligations. The man should come to the aid of the lord in all his necessities; the man's purse as well as his body should be at his lord's disposal if the lord be in a strait. Gradually the occasions on which an aid of money may be demanded are determined. Glanvill mentions the aid which helps a lord to pay the relief due to his overlord, the aid for knighting the lord's eldest son and...

Although this book was envisaged as a joint venture and bears the name of both Pollock and Maitland, it is substantially the work of Maitland. It was recognised at once as a masterpiece and has since been accepted as one of the great histories in the English language.