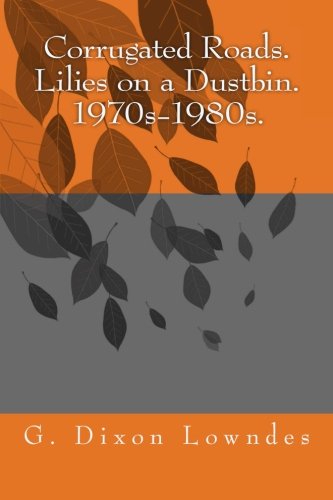 Jenny Jae continues her struggle to write as well as bring up her two small children, Gemma and Rosie, in Corrugated Roads—Lilies on a Dustbin. 1970s-1980s. It is the third book in a five–part series. By day Jenny takes any job that will provide her with a roof over their heads, and by night she chronicles the lives of the people around her in the eccentric, gay, and slightly disheveled neighbourhood she lives in. Gradually her stories about it, and her family are published, and Jenny is on her way.

My name is Ginny Lowndes and I come from Mitchell in south-western Queensland. For those of you who are unfamiliar with The Outback (or Australia) as you go down the Warrego Highway towards Charleville, Mitchell is situated between Muckadilla, where the bore water was said to heal a shearer’s bad back, and Mungallala. My life and writing has been informed by Mitchell. In the television drama serial, Neighbours, I created the Mitchell family — Charlene, Henry and Madge Mitchell. When Neighbours was on Channel 7 I worked as the storyteller, story editor, writer and creator of most of the characters, and then when it was sold to Channel 10 I undertook much the same roles. Mitchell again featured as the inspiration for my 2010 novel, Corrugated Roads, published by Montpelier Press. It can be found at http://www.montpelierpress.com.au/ My first story, The Maranoa Picture Theatre, was broadcast by the ABC in 1979. After I graduated from the film school, AFRTVS, I found work writing all the problems for the television show Beauty and the Beast. I moved to Melbourne to work at The Australian Children’s Television Foundation (ACTVF) as a script and story editor. Later I became the script and story editor for Neighbours where I used all the knowledge I’d acquired at the ACTVF in the show, mixed with the stories from my life. This was followed by Sons and Daughters, Australia’s Most Wanted, A Country Practice, the Zirkos Kids and more. I have written for The Nation Review, Billy Blue magazine, and Woman’s Day. I gave my children a collective heart attack when I told them I had my photo taken for Playboy. It had published a short story, and needed a photo to accompany it. My textbooks about writing television and film are in various libraries. The original Charlene Mitchell (Kylie Minogue) script plus many others have been donated to the The John Oxley Library, State Library of Queensland (Reference Code: 10147). They can be viewed on their website as well as mine.