Items related to In Pursuit of Gold: Alchemy Today in Theory and Practice

Lapidus; [David Curwen] In Pursuit of Gold: Alchemy Today in Theory and Practice

In Pursuit of Gold: Alchemy Today in Theory and Practice 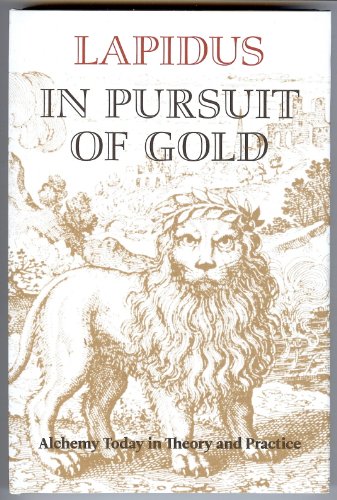 Hardcover. 8vo. 211pp + 52pp colour plates. White cloth with gilt titling to spine and device to upper board. Colour and b&w illustrations. Writing under the nom de plume of Lapidus, David Curwen (1893-1984) was one of the most mysterious personalities of modern alchemysticism, and one of the very few practicing laboratory alchemists residing in the United Kingdom during the latter half of the 20th century. In the decades since the publication of the first edition of In Pursuit of Gold in 1976, many have speculated regarding the true identity of Lapidus, and a few individuals have even laid claim to be the enigmatic adept. Upon its publication in 1976, In Pursuit of Gold, written by the enigmatic Lapidus was hailed as a rare work by one of the few practicing laboratory alchemists writing in English during the mid-to-late 20th century. Primarily building upon three alchemical texts - The Sophic Fire by John Pontanus, The Secret Book of Artephius and Sir George Ripley's long poem, Twelve Gates - and more than 2 dozen of Theodor de Bry's masterful engraved emblems from Michael Maier's 1618 Atalanta Fugiens, Lapidus offers his own observations and conclusions drawn from decades of quiet alchemical work in his subterranean Melcombe Street laboratory. Contemporary alchemists with an interest in the confection of the star regulus of antimony will assuredly gain from reading and re-reading In Pursuit of Gold. Beyond simply confirming the true identity of Lapidus as David Curwen, this revised and expanded second edition includes a foreword from Stephen Skinner, along with an introductory biographical essay on Lapidus - his life, family, alchemical work, and writings - by Tony Matthews, grandson of Lapidus. This second edition of In Pursuit of Gold also features intimate personal and family photographs, facsimiles of correspondence between Lapidus and the alchemical historians F. Sherwood Taylor & E.J. Holmyard, and original oil paintings by Lapidus.