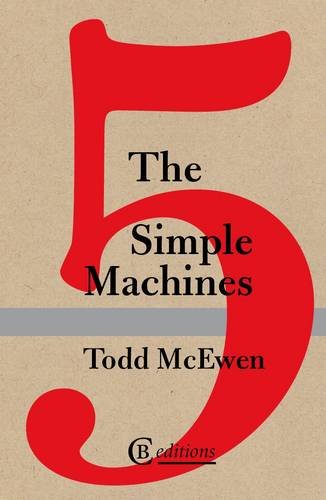 McEwen offers ferocious wit, a stream of magnificent sentences . . . and a blissful knowledge of what really matters in life.
Guardian

The lever, wedge, wheel and axle, pulley, screw and inclined plane. Some argue that the plane is an application of the wedge, or vice versa; some insist there s altogether too much focus on the mechanics but a boy whose dik (sic) is beginning to make nonsense of the fit of his trousers has to begin somewhere. Along the way, fine women are loved and lost, human error is not averted, and much is learned, of both a practical and a speculative nature. The machine, says Saint-Exupéry, does not isolate man from the great problems of nature but plunges him more deeply into them.

The stories in this book are about reminiscences of sex: relationships that went bad, or were ridiculous, or were mismatches there's one about a marriage that seems to be working, yet is still radically unsatisfactory. The titles are six so-called mechanical powers the lever, wedge, wheel and axle, pulley, screw and inclined plane . The explanation for the confusion arising from the six mentioned here and the big red 5 on the front cover comes in an italicised form under the chapter headed Wedge : It is well known that, strictly speaking, the wedge is only an application of the inclined plane. But. And then we re off: a story in which the girlfriend wears wedge shoes, her car looks like a wedge, and there are wedges driven between the characters.

This is a rare kind of humour: it is not only a matter of verbal deftness a word, or a comma, popping up unexpectedly but of intelligence, lightly applied . . . These stories manage to be unflaggingly funny, yet never wearisome: the tonal control is complete. And the deeper message is that laughter is a cure.
Nicholas Lezard, Guardian ,p. This beautifully produced little book is about sex. It is not about sex in a way that puts it at any risk of being nominated for the ludicrous Bad Sex Award that acknowledges the clumsiness of some novelists when they feel the need to join their characters between the sheets. Nor is it anything to do with the sort of erotic fantasy that made 50 Shades of Grey a Kindle hit. In fact, it takes time to ridicule people who find diversion in the paraphernalia of manacles, whips and chains and have fake dungeons in their garage instead of a car and a lawnmower. Doubtless such folk would retort that McEwen's way with sex is vanilla , but more of us might regard it as adult, realistic and recognisable (even when it is dealing with the juvenilia of real life) and remark that vanilla is surely the gold standard for ice-cream. As much, if not rather more, to the point is that it is beautifully written and extremely funny . . . McEwen, as readers of any of his work will know, has a remarkable gift for the startlingly original and yet instantly comprehensible descriptive phrase.
Keith Bruce, Herald (

The presiding mood is one of disenchantment tinged with hopefulness: a married man struggles with the distinction between love and sex; a student reminisces about lazy summer days; a jaded editor juggles lovers. His girlfriend vents: You weren t angry enough. Yes I was, mumbled Federico. She put a hand on her hip, then pulled the plug in the sink and the water spun down the hole counterclockwise as it always does in New York. I want you, she said very evenly, to force me to suck you while you re doing the dishes. But you re doing the dishes, said Federico. Prosaic detail, strained emotion, a witty denouement: this is classic McEwen. He is a deft wordsmith, patterning his stories with puns and motifs. One girl accepts her lover s dinner invitation in a pleasing light blue loopy hand , and later looks up at him with eyes which were as open and free as her handwriting . Guacamole, a green dress, and red wedges, are all handled with comparable deftness, not to mention the ubiquitous screw, lever, and other simple machines . You finish the book and feel compelled to turn back to the beginning. --Jo Wilding, Erotic Review

Todd McEwen was born in California in 1953 and graduated from Columbia University in New York. He worked in broadcasting, theatre and the rare book trade before settling in Scotland in 1981. He has published four previous novels.