Items related to One Flight Too Many: The Saga of a Young Spitfire Photograph...

Taylor, Jimmy One Flight Too Many: The Saga of a Young Spitfire Photographic Pilot in WW2 and Its Aftermath

One Flight Too Many: The Saga of a Young Spitfire Photographic Pilot in WW2 and Its Aftermath 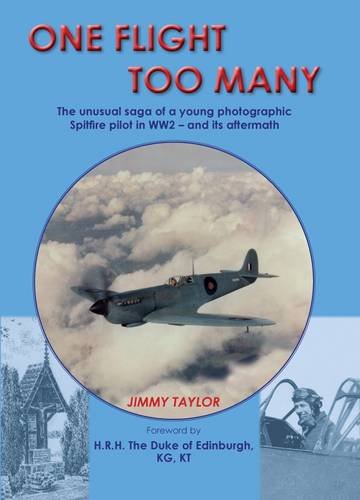 Photographic Reconnaissance (PR) has recently caught public interest and this book, written by a former PR Spitfire pilot, gives a very clear description of what he had to do, the aircraft and cameras he was given, how he planned and took his photographs, and how he navigated his way, alone and unarmed under constant observation by enemy radar, to his distant targets in Occupied Europe and Germany, often in difficult weather conditions, and returned safely with the films containing information of vital importance to the photo-interpreters at RAF Medmenham and to the Allied commanders. This is also Jimmy Taylor's autobiography, so the reader has access to his frank contemporary diary of autumn 1944 and goes with him on his exciting sorties, including when he was chased by a then-unknown German jet, and his last one, when his engine blewup and forced him to parachute into a part of eastern Holland and led to his eventual capture. It also set in train a heart-rending German atrocity, which still calls him back every year to the families of the victims. It led to his meeting many historians, both Dutch and English, and so to his discovering the remarkable activities of his 16 Squadron during Operation 'Market Garden', the experiences, both cheerful and tragic, of his friends and colleagues in the RAF, and the heroic behaviour of the Dutch Resistance. Jimmy Taylor's progress through his training in Britain and America, his wartime flying and treatment as a prisoner, his post-war career and subsequent involvement with gliding, with his wartime colleagues and their later successors flying modern aircraft, and with the media, is told with humour and modesty and makes for fascinating reading, and is enhanced with hundreds of photographs taken at the time, including some of his own sorties. This is a great book in every sense: it will enlighten readers who are curious about the work of the PR squadrons and will fascinate aviation enthusiasts of all ages. It has appeared at the right moment and may well become a classic. The Cover Picture This was one of several taken in 1943 by the distinguished aviation photographer Charles E. Brown of Spitfire XI EN654. This served on 16 Squadron from June 1943, and Jimmy Taylor flew it from A12 airstrip in Normandy to B48 Amiens-Glisy on 9th September1944 when the Squadron moved its base. Two days later it was badly damaged in an accident, was sent to the UK for repair, and never returned to the Squadron. Photo: the Charles E. Brown Collection