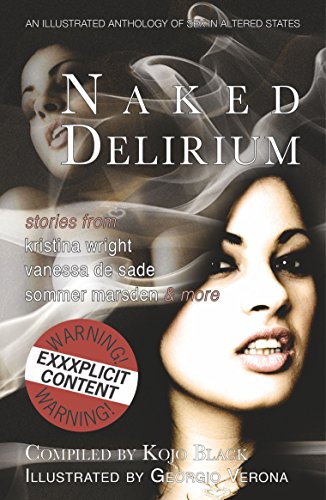 The mind has the power to save us from depravity...or to drive us further to it! NAKED DELIRIUM delves deep into the human psyche to celebrate sex in altered states! Five twisted tales, all lusciously illustrated by Giorgio Verona! Within these pages, we invite you explore the indecent expanse of the unfettered mind, and maybe get a little bit delirious yourself. Free your mind....and great sex will follow! In SUGARSHUTTLE EXPRESS by Sommer Marsden, a three-day hike becomes a three-day high when Danny and Wren climb aboard! The mystic waters of the Lakeshore Spa are the domain of Gilinda the Good....but Gilinda is not always so good, in GILINDA AND THE WICKED WITCH by Vanessa de Sade. In LILITH RETURNS by Kristina Wright, Adam and Eve have lived together in harmony for millennia. But the return of the demon Lilith is set to result in one cataclysmic climax! Then, a young woman is left fighting for her very body and soul when a pagan ritual goes suddenly wrong, in A WOMAN POSSESSED by Velvet Tripp. And finally, in SMOKING HOT by Fulani, hypnosis as helped Hanna kick a 40-a-day smoking habit, but the side effects have been most unexpected!... NAKED DELIRIUM is fully and lusciously illustrated by Georgio Verona!

Sommer Marsden is a wine-swigging, dachshund-owning, wannabe-runner who lives in a little house in a little town near Baltimore, Maryland. Her fiction runs the gamut from bondage to zombies to humor, and her short stories can be found in well over 100 (and counting) erotic anthologies.
Vanessa de Sade is a self-confessed sensualist who likes exploring the darker sides of sexual desire. An obsessive lover of old movies, operatic theatre and authors like Angela Carter, Vanessa likes to fill her stories with lush imagery, bizarre characters, and misfits in search of love.
Kristina started writing fiction in the first grade and hasn't stopped. Along the way, she's written everything from greeting cards to book reviews, but fiction remains her passion. Now, all grown up, Kristina has penned several dozen erotic stories.
Velvet Tripp has been on the fetish scene since 2001. She took to it like a duck to water and found it gave her the freedom she'd long needed. Velvet Tripp is the partner and sub of the author Fulani, and Velvet's literary inspiration often springs from her own bisexual lifestyle.
Fulani has been part of the fetish scene for almost two decades - early on he acquired the nickname 'Fulani' and decided to use it for his writing. He first came to erotica in 2008, when he spotted a call for submissions in a popular erotica magazine, and he's been writing ever since.
Giorgio Verona took to painting at an early age. His family fostered his love of the arts and at 14 he was given a place at a School for Fine Art. After working in advertising, he found himself turning back to painting. To his surprise, he found himself becoming something of an (almost) overnight success.
Kojo Black has compiled nearly a dozen collections and anthologies, and considers himself to be an unrepentant purveyor of the playfully perverse.

3. Naked Delirium: An illustrated anthology of sex in altered states

5. Naked Delirium: An Illustrated Anthology of Sex in Altered States!

8. Naked Delirium: An Illustrated Anthology of Sex in Altered States!

9. Naked Delirium: An illustrated anthology of sex in altered states