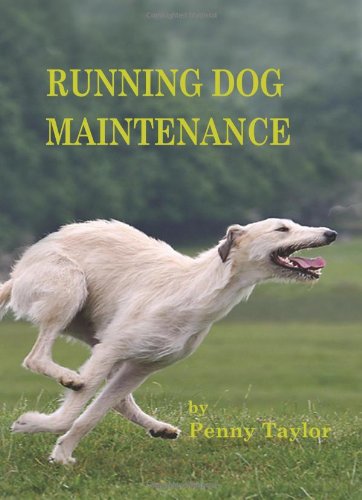 A useful reference book to help Running Dog owners prepare their dogs for a healthy life whether that involves strenuous work, competition or as companion animals. Written in a down to earth style, it tells how to rear Lurchers and Sighthounds; to avoid injury; to recognise specific types of injury; to treat them yourself and when to see the vet.

"At last Penny Taylor has found time to share her knowledge of conditioning running dogs, as well as her stockwoman's skills in dealing with the plethora of injuries that are met in the field, and sometimes out of it as well. This book is a compelling read for anyone who is involved with lurchers and sighthounds at work, containing important information on exercise, fitness, muscle function, strains, ruptures and treatment, ligaments bones and joints, head and foot injuries. There is detailed information and some outstanding photography showing the stresses the dogs' frames come under in their work, what can happen and how to treat it for best results. Important subjects such as nutrition, teeth and skin, hormonal changes in bitches and how they affect work, parasites, lesser-known dangers and how to avoid them if you can and manage them if you have to, discussion on housing and very importantly and so seldom mentioned: how mental well-being can improve your dog's performance. Penny's experience comes from many years of working terriers and lurchers, and consulting with specialist vets in finding the best ways of treating the inevitable injuries. Readers will already be familiar with the relaxed style of Penny's writing, which allows her to pass on information without ever underestimating her audience's experience and intelligence, or burying science in unnecessary complexity. Penny stresses that she never stops learning, and in that sense, a book like this can never be completed, but in sharing what she knows at this point, she has made a powerful contribution to the welfare of the lurcher. No matter how much you have seen and done, this book will teach you something, and it is an absolute must for anyone coming into the world of the working lurcher as a novice. "Running Dog Maintenance" is a valuable reference book for everyone who steps out into the field with a lurcher. (Jackie Drakeford - Countryman's Weekly) "I have never met Penny Taylor, but we frequently speak on the phone, every conversation we have has been about dogs; working dogs that is! Mainly about lurchers but on the odd occasion terriers and little bushing dogs have been the highlights of our natter. I don't need to meet Penny in order to know that she is a dedicated lurcher woman! I established that during our first ever telephone conversation. The more I spoke to Penny the more it quickly became apparent to me that she also knows what she is talking about. Penny has been around working dogs for most of her life. In her childhood her father had a gundog, then came the giants of the canine race; Wolfhounds became a big part of Penny's life and as big as they were they hunted and caught rabbits for Penny; one could say that these magnificent beasts were the start of an addiction; an addiction for running dogs. Penny has kept and worked lurchers since 1987. Pre ban she was secretary for The East of England Lurcher Club and she held that position for at least fourteen years. The club coursed once or twice a week throughout the season on the Lincolnshire Fens. During that time penny was very successful in her quest, winning the main double event a couple of times and also the singles twice. (I must add that I had to squeeze that bit of information from one of Penny's close friends; she wasn't going to disclose any of it to me). Before the ban Penny worked her dogs on most quarry species but she particularly liked to run fox and deer. These days it's a bit of mooching and ferreting for Penny. The lurchers in Penny's care go back twenty years of breeding within a family, as Penny points out; its not quite line breeding! When Penny phoned to ask if I would review her new book, RUNNING DOG MAINTENANCE, I gladly said yes, knowing Penny's wealth of knowledge in this department and I'm thrilled that she is willing to share that knowledge with us. RUNNING DOG MAINTENANCE is a very strong, sturdy hard back. There are 13 chapters, 232 pages full to the brim of good sound advice on all kinds of running dog matters. In chapter one Penny tells us how she exercises and conditions her dogs; I suppose this ones a matter of choice and what ever works for the individual! Still, the chapter is full of good sound tips which most of us can gain from. The second chapter is about muscles: their function, strains, ruptures and the treatment for them. Penny delicately describes the different types of muscles that go in accordance with our different types of running dogs! In total there are 140 detailed colour pictures; some of wounds and injuries; the kind of injuries which any one of us who work our dogs could be faced with! Penny goes into explicit detail on the correct treatment. There are also some fantastic pictures of running dogs in action throughout the book. I just love the photo on page 35 where a stunning merle lurcher is nearly overtaking its quarry and is just about to pick up the fleeing rabbit. All in all I think this book just about covers everything the running dog enthusiast needs to know, and I for one will save in phone bills; when the time arises I will just reach for Penny's book, in stead of phoning for advice!" (Chipper Smith -Earth Dog Running Dog)"

Penny Taylor lives with her partner, Andy, in Cambridgeshire where they keep and work lurchers, terriers and ferrets. During a lifetime spent with dogs Penny has spent the last 23 years refining and honing the skills which enable her lurchers to remain sound and healthy throughout their lives. She believes that good canine husbandry is both an art and a science; it is the maintenance of a healthy mind in a healthy body and as such, is not something that can be learnt overnight. Penny freely admits that she will never know everything there is to know about dogs and that the learning curve is a journey which no owner will ever finish so long as they keep their minds open. Penny is also a regular contributor to The Countryman's Weekly magazine writing on the subjects of training, health and working both dogs and ferrets. She has also maintained her own line of lurchers for many years.