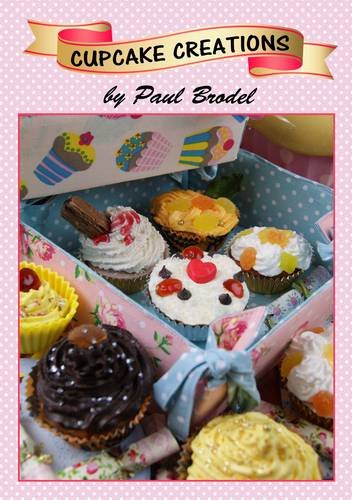 We would like to introduce our new book: Cupcake Creations. Full of many exciting cupcakes with Easy-To-Follow recipes and Top Tips! It will be great for anyone who has purchased appliances such as: food stand or hand mixers. The book contains a selection of recipes all created by Paul Brodel who is now a successful author of nine cookbooks.

Paul was born in Plymouth and has loved food for as long as he can remember. When he was young Paul sailed around the world with his parents and so was introduced to an array of new and exciting cuisine from a very early age. He has also learnt how to create a meal in a tiny galley kitchen with very few ingredients and equipment. By the time he returned home Paul was hooked, and knew he wanted to work in the world of catering. Paul attended Plymouth catering college where he discovered a natural flair for cooking and as part of the coarse he spent time in a French catering college in the Jura Mountains in France. Paul loved France so much that he stayed there for three years learning about Mediterranean cooking, however Paul wanted to experience all areas of the catering industry this included working as a waiter at the House of Commons (in fact he was there working the night that Margret Thatcher got deposed). When satellite television was launched Paul was headhunted for a position in television food styling and work for a lot of the top chefs preparing the dishes for Here s One I Made Earlier Paul has worked on all the major shopping channels demonstrating pieces of kitchen equipment and cookery demonstrations around the UK, Europe and Australia. Paul is now considered one of the most respected and a popular guest chef presenter on one of the countries top shopping channels and currently has nine cookbooks available. What s For Dinner? Halogen Cooking Made Simple Multi-Cooker Made Simple Slow Cooker Made Easy Halogen Cooking Made Easy Hot Air Frying Chop & Blend Hot Air Frying and More Cupcake Creations

Book Description Paperback. Condition: Very Good. The book has been read, but is in excellent condition. Pages are intact and not marred by notes or highlighting. The spine remains undamaged. Seller Inventory # GOR005479882

Book Description MWB Publishing Limited, 2011. Paperback. Condition: Used; Good. **Simply Brit** Shipped with Premium postal service within 24 hours from the UK with impressive delivery time. We have dispatched from our book depository; items of good condition to over ten million satisfied customers worldwide. We are committed to providing you with reliable and efficient service at all times. Seller Inventory # 1375971

Book Description MWB Publishing Limited 12/07/2011, 2011. Condition: Very Good. This book is in very good condition and will be shipped within 24 hours of ordering. The cover may have some limited signs of wear but the pages are clean, intact and the spine remains undamaged. This book has clearly been well maintained and looked after thus far. Money back guarantee if you are not satisfied. See all our books here, order more than 1 book and get discounted shipping. . Seller Inventory # 7719-9780956393593

Book Description MWB Publishing Limited 12/07/2011, 2011. Condition: Very Good. Shipped within 24 hours from our UK warehouse. Clean, undamaged book with no damage to pages and minimal wear to the cover. Spine still tight, in very good condition. Remember if you are not happy, you are covered by our 100% money back guarantee. Seller Inventory # 6545-9780956393593