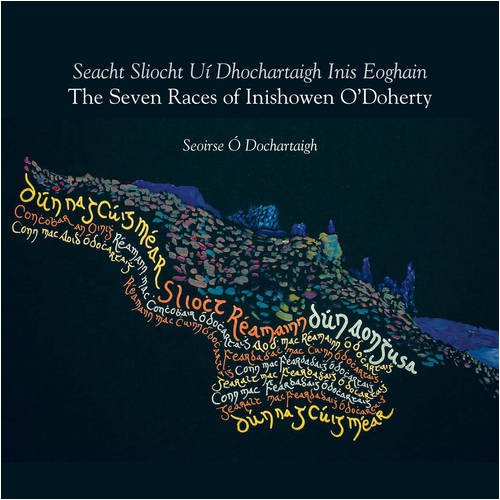 Did you know that surname Doherty, or O'Doherty - now known all over the world - can be traced back to one ruling Gaelic family from north west Ireland who flourished in the 13th, 14th, 15th and 16th centuries? Did you know that their genealogies have survived more or less intact? Furthermore, did you know that their castles can still be seen to this day- albeit many in a ruinous state - scattered all over the beautiful Donegal peninsula of Inishowen? The artist Seoirse O Dochartaigh has researched the origins of this famous clan and painted their long- abandoned castles with the same care and attention to detail that medieval scribes applied to their illuminated manuscripts. The paintings are reproduced in full color in this book and their story aptly told. Clan names intertwine throughout.

Seoirse O Dochartaigh will be well known to many in Donegal since his one-man exhibitions of paintings in Ballyshannon, Buncrana, Dunree, Gweedore and Donegal Town. He has also had numerous shows throughout Scotland, France, Germany, Holland, Austria and the USA. Music is a persistent theme in O Dochartaigh's work: ideas come directly to him from the experience of listening to music, but he also trawls the words of songs sometimes, or reads poems, in search of the right stimulus Seoirse O Dochartaigh has recorded 9 CDs of Irish songs from his vast collection and takes the opportunity each time to reproduce some of his paintings on the cover, in the booklet and on the disc itself. He strives always to bring music and visual art together as one and the same entity. This is clearly evident from his recently constructed web-site www.seoirse.com which celebrates the twin arts at every turn.