Items related to King John's Lost Treasure and the Templars 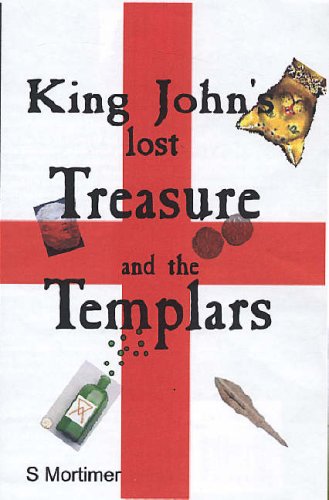 Was King Richard really killed over a pot of worthless
coins? What secret wessage was brought to Prince John at Brittany by the
Knight Templars that would change his life forever?
Was King John poisoned at Kings Lynn and why and by Whom?Did the Kings
Treasure really go down in the Wash?The mystery ran all the way back to his
brother King Richard and might follow John into his grave.
Some of these eight hundred year old questions could now be answered.

Richard gazed out of the open tent flap and could not believe his
life was so very nearly over,he knew it,the smell of the festering flesh of
his shoulder,the gangrene infesting the dirty wound.The septicemia had
followed,starting with the all to familiar small red spots on the skin,each
spot growing rapidly untill several merged together forming dark blue-black
bruise like patches.His whole body was black now.He was saddened by the
sound of his women weeping openly.Berengria,his wife sitting beside
him,Eleanor,his mother tight lipped and stern stood stiffly by his feet.His
beloved sister Joan wringing her thin hands together over her huge,pregnant
belly.The Bishop,Walter of Rouen...........