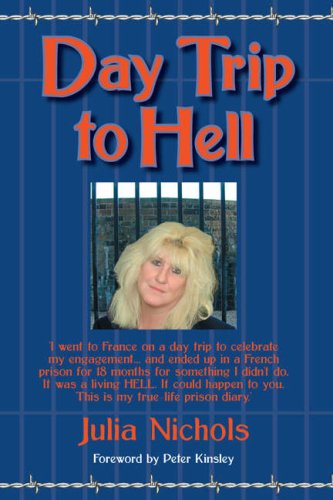 A book about France and the perils of the French 'justice' system for innocent citizens of other countries.

You may, quite understandably, consider drug smugglers to be a scourge on society.

You may think that, if these criminals are caught and imprisoned in a country which treats prisoners abominably, they deserve all they get.

Given the harm and the crime that drugs cause, that may be an understandable position to take.

But, what if you, an ordinary law-abiding citizen, went on a day trip to France, were pulled over, imprisoned immediately on charges of drugsmuggling, without any evidence, and put in a terrible jail...

...and you didn't do it, but were given a long sentence and a huge fine anyway.

And what if you contacted the British Consulate and found that they were apparently unable or unwilling to help you - finishing off their letter with the words, `Please let us know if you have any immediate problems.'

(Presumably that means, any problems apart from being strip-searched, handcuffed, and forcibly locked up in a dirty overcrowded French prison with disgusting food and inadequate medical facilities when you were only
taking an innocent day trip across the Channel).

What would you think then?

`Day Trip to Hell is a sobering reminder - if one were needed - that Britain has little in common with other
countries of Europe, and especially not with France when it comes to our respective police and judicial
systems. The most obvious difference, of course, is that, whilst in England you are innocent until proven
guilty, it is the opposite in France. The author of this book discovered these things for herself, and her
day-by-day diary entries enlighten us all with the brutal facts of French `justice' and prison life.'

What Julia went through was a living HELL... and here, through the diaries she kept and smuggled out, she tells the story of her 18 months in prison.

This book contains scenes of gang rape, starvation, suicide, torture, and beatings endured by an innocent British citizen in a country just twenty-five miles across the English Channel.

English mother-of-two, Julia Nichols, was living in Dymchurch, a small seaside village in the south east of England, not far from the ferry ports of Folkestone and Dover.

Her father had died suddenly in December 2002, and her sister had died from a brain tumour in March 2003. And, with her mother in a nursing home, it was a very sad and difficult time for Julia and the family.

Later that month, on 22 March, her partner asked her to marry him. They went to buy the engagement ring that day. Then he proposed a day trip to France to celebrate with dinner in Boulogne, and to use the opportunity to buy some
beer and wine for the official engagement party the following weekend.

They left for their day trip to France on 23 March. Little did she know then that she would end up in the notorious French prison at Loos, and that she would not return to England for eighteen months.

What Julia went through was a living HELL... and here, through the diaries she kept and smuggled out, she tells the story of her 18 months in prison.

This book contains scenes of gang rape, starvation, suicide, torture, and beatings endured by an innocent British citizen in a country just twenty-five miles across the English Channel.

A timely warning for holiday travellers, and a useful survival guide for visitors to France who might find themselves in a similar situation.

Book Description Hardback. Condition: Very Good. The book has been read, but is in excellent condition. Pages are intact and not marred by notes or highlighting. The spine remains undamaged. Seller Inventory # GOR001791350

Book Description Hardback. Condition: Good. The book has been read but remains in clean condition. All pages are intact and the cover is intact. Some minor wear to the spine. Seller Inventory # GOR005246091