Items related to Central 1179: The Story of Manchester's Twisted... 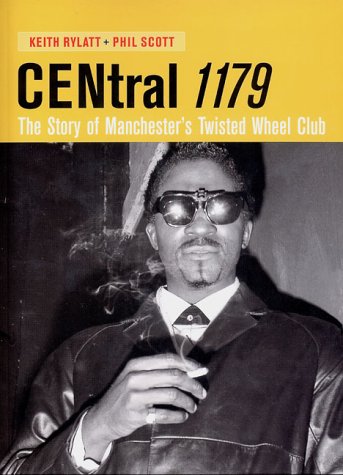 RYLATT, KEITH was born in 1950 in Rotherham. The beat boom of the early '60s gave him a taste for pop music,- the Who, Rolling Stones and Spencer Davis in particular. Live performances by the likes of Root & Jenny Jackson and the Victor Brox Blues Train at his youth club whetted his appetite for R&B. He first encountered 'real' soul records at the Bee Gee Club and Spinning Disc in Leeds and later of course, the Twisted Wheel. A move to Manchester College of Art at the end of the decade enabled him to attend the Wheel on a regular basis, soon acquiring a taste for 'rare soul'. Shortly after the closure of the club, Keith left the north to become a teacher in Kent where he met up with Chris Savory and his Hot Buttered Soul magazine, for whom Keith interviewed such artists as the Intruders and Harold Melvin in the '70s. Similar work for Rod Dearlove's Midnite Express in the '80s inspired him to launch his own fanzine, Come And Get These Memories, a few years later.

SCOTT, PHIL was born in Manchester in 1948, and grew up amongst Teds listening to American rock and roll in his aunty's coffee bar. In his early teens, he was an avid listener to Radio Luxembourg and keen fan of early '60s beat groups, in particular, 'Lexponents' of R&B like the Rolling Stones, Yardbirds and Cyril Davis' All Stars whose 'Country Line Special' he first heard on, of all programmes, Desert Island Discs. A chance visit in 1964, to see John Lee Hooker at the Twisted Wheel All-Nighter, Brazennose Street changed everything. He witnessed the early Mod movement, and fashions and dance styles that were a major part of it, and became a convert to the emerging sounds of young black America. After the club's move to Whitworth Street, Phil became a regular enjoying many of the visiting American artists - with particular memories of Junior Walker, Alvin Cash, the Coasters, Marv Johnson and Ben E. King. Phil currently lives and works in France, still collects vinyl, and attends as many soul 'dos' ashe can.

Whether by accident or design, it was the actual choice of the name the Twisted Wheel that did it for me, I don't think there has been a more suitable name for a club ever since. The name Twisted Wheel was perfect and it fired up my imagination well before I had the bottle to go. It conjured up images of some kind of secret underground scene, a club full of weird people who stayed up all night digging strange music. I was right, but there was much more to the place than that.

It was a warm summer night in August 1964. I had been to the Oasis on Lloyd Street and I'd had a brilliant night and wasn't ready for catching the last bushome. I'd first heard about the Wheel from some kids at school, it was just around the corner from the Oasis and had the reputation as the place to go. The Wheel was a fascination to lots of us at the time and its notoriety was incredible. Such was my preoccupation with the place, every night instead of doing my homework I would scour the Manchester Evening News for any snippets I could find about the Wheel and that grown up world down town. 'Drug Squad Raids Club', 'Strange Looking Teenagers', 'Girl Sold Purple Hearts In Caf', 'All Night Rave-Up', 'Pep Pill Family Had 800 A Day On NHS' 'The urge was too strong to resist, I knew I would go the first chance I could.

Forgetting about the all-night bus, I turned off Albert Square and into Brazennose Street, right on the stroke of midnight - the impact was unforgettable. I had walked into a different world. There must have been between two to three hundred people milling around the top end of Brazennose Street. Further down, outside the entrance to the Wheel on the left of the street I could see the head of the queue. Stretching from the Wheel, almost the whole length of Brazennose Street were rows and rows of scooters. They were all decked out in sparkling chrome crash-bars and floridas, spotlights and carriers. Although I noticed quite a number of Vespas the majority of the scooters were Lambretta TV 175s and LI 150s. Some had fur covered backrests or small racing fly-screens with logos like 'Wolfy' or 'TV' Club, all were kitted out with racks of wing mirrors. Gleaming machines, sparkling under the street lights, it was a wonderful sight. Their owners hung around in ex-US Army fish-tail parkas, the hoods of which were trimmed with fox fur. Under their parkas I noticed they were wearing smart mohair suits. At the entrance to the Wheel I saw a group of odd looking youths with short cropped hair, some were wearing full length leathers, others ankle length, semi-transparent navy blue plastic macs. I walked past the entrance, looking for the end of the queue. A couple of boozed up sailors who had obviously had a heavy night on the town came staggering past on the opposite side of the street. I could hear them slagging off some of thescooter crowd, calling them 'poofs' and taking the piss. In a flash, threeor four of the crowd rushed across the street and beat the shit out of them. Luckily the sailors sobered up quickly enough to leg it.

I eventually found the end of the queue, which by now stretched from BrazennoseStreet, around the corner at Ridgefield onto Queen Street. Asking myself what the hell I was doing there, I nervously waited in line. Eventually I reached the entrance to the Wheel, I could feel the hot air and smell the coffee coming frominside the club. Proceeding downstairs, I came to a dark red velvet curtain, above which there was a sign 'Are you 18 years of age?' I was politely asked my age by a smartly dressed man who was standing by the till. I later found out he was the owner, Ivor Abadi.

I lied about my age, completed a membership form, paid the girl on the desk my six shillings and entered the Wheel for the first time. It was a fantastic feeling, my first sight of the inside of the Wheel. Years later, lots of people I spoke to clearly recalled their first experience of walking into the Wheel, I understand why.

I made my way to the counter of the coffee bar on my left. I must have looked areal jerk that night with my long hair and green US Army combat jacket, really out of place. The club was packed with the strangest looking crowd of people I'd ever seen. One guy was walking around in what looked like a bright silk boxing robe and sandals, another youth in Polaroids, who had strutted in behind me, was wearing a long green fishtail US army parka, trimmed on the back and around the hood in fur. Underneath he was wearing an immaculate fawn mohair suit, his hair unlike mine, was short, neat and spiky. Everyone seemed to know him. I later found out that his nickname was Wolfy and he was the leader of a scooter crowd from out of town.

A couple of smart looking kids in polo shirts and jeans came over to me, and after weighing me up, asked if it was my first visit to the Wheel and if I normally went to a place called Heaven and Hell. I knew all about the club they meant, it was a dive of a place with a notorious reputation, frequented by deadbeats and scruffs. Situated on the other side of town, the Heaven and Hell also had all-nighters but it was a club that attracted undesirables, a place where kids could 'doss' down for the night on mattresses. Wheel kids would not be seen dead near the place. I assured them that I wasn't a member of Heaven and Hell and loved the Twisted Wheel, which seemed to satisfy them.

Buy Used
Condition: Good
Both the head and tail of the spine... Learn more about this copy

Book Description Paperback. Condition: Very Good. The book has been read, but is in excellent condition. Pages are intact and not marred by notes or highlighting. The spine remains undamaged. Seller Inventory # GOR004990114