Items related to The Life and Martyrdom of St.Wenceslas, Prince of Bohemia,...

Matthias Hutsky The Life and Martyrdom of St.Wenceslas, Prince of Bohemia, in Historic Pictures - Prague 1585

The Life and Martyrdom of St.Wenceslas, Prince of Bohemia, in Historic Pictures - Prague 1585 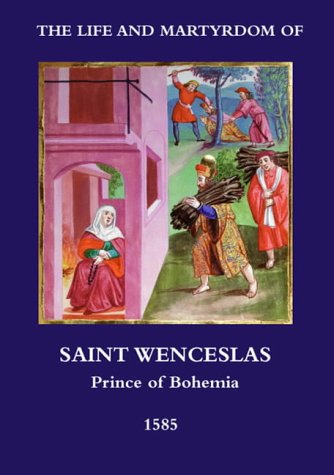 Facsimile of a 16th-century illuminated codex of the story of 'Good King Wenceslas' in miniature copies of 24 legendary scenes from the life of the Czech patron saint painted on the walls of the chapel where he is buried, in Prague's cathedral of St Vitus. English translations of the Latin text are on the pages facing the miniatures, left blank in the original codex. With art historical and literary comments by Dr Karel Stejskal and Professor Eduard Petru.

This delightul codex is an early example of a renaissance artist's speculative self-publicity.

Matthias Hutsky was a miller's son whose talent was spotted by Bohemia's governor, the Emperor's son Ferdinand. He had him trained as a painter and Hutsky made his living mostly as illuminator of huge church songbooks, eventually to become warden of the painters' guild. The gift of a codex was meant to demonstrate to Archduke Ferdinand the artist's competence and to encourage him to give the artist a commission.