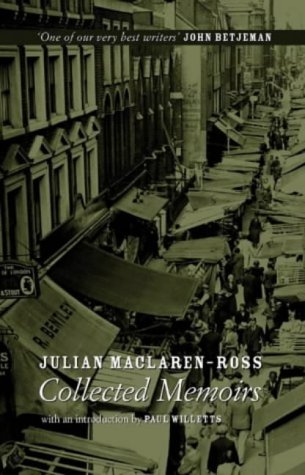 Julian Maclaren-Ross was one of the most colourful inhabitants and chroniclers of the Soho and Fitzrovia of the forties, fifties and sixties. He knew and wrote about its most memorable characters including Dylan Thomas, Graham Greene, Cyril Connolly, Tambimuttu, Nina Hamnett and Woodrow Wyatt. He was something of a dandy and a gifted raconteur, and his life, often chaotic, and related unsentimentally by him in these memoirs, veered between the fringes of the literary establishment and occasional homelessness.

Book Description Black Spring Press, 2004. Paperback. Condition: Good. Connecting readers with great books since 1972. Used books may not include companion materials, some shelf wear, may contain highlighting/notes, may not include cdrom or access codes. Customer service is our top priority!. Seller Inventory # S_250743964

Book Description Black Spring Press, 2004. Condition: Good. A+ Customer service! Satisfaction Guaranteed! Book is in Used-Good condition. Pages and cover are clean and intact. Used items may not include supplementary materials such as CDs or access codes. May show signs of minor shelf wear and contain limited notes and highlighting. Seller Inventory # 0948238305-2-4