Items related to Clarifying the Jewel Rosary of the Profound Five-fold...

Clarifying the Jewel Rosary of the Profound Five-fold Path: Garland of Mahamudra - Practices 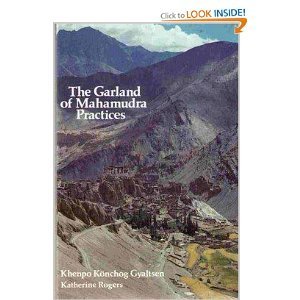 This text is a manual of practical instructions for students who are or would like to practice the path of Mahamudra in meditation. "Mahamudra" refers to a path to enlightenment taught by the Buddha and transmitted through the spiritual lineage of Tilopa, Naropa, Marpa, and Milarepa. Gampopa, a disciple of Milarepa who lived in the eleventh century, brought together these teachings of the Buddha into one five-fold path consisting of an enlightened motivation, deity yoga, guru yoga, mahamudra, and proper dedication, to which his main disciple, Pakmo Druba, gave the name "The Profound Five-Fold Path of Mahamudra."
Jigten Sumgon, the successor of Pakmo Druba, founded the Drikung Kagyu order and taught Mahamudra extensively.
The fifteenth successor of Jugten Sumgon, Kunga Rinchen, known for the directness and clarity of his teachings, composed the text "Clarifying the Jewel Rosary of the Profound Five-Fold Path."

"A clear and concise summary of the Vajrayana path as understood in the Kagyu tradition." Reginald Ray, author of "Indestructible Truth "and "Secret of the Vajra World"
"Offers step by step instructions to freeing the mind from its cage to be liberated into its natural state." Venerable Dhyani Ywahoo "A modern Kagyu Master has brought to light the gift of an ancient Kagyu Master an essential teaching for anyone interested in the theory and practice of Mahamudra." --Lopon Konchog Trinley Dorje, president of the Tonglen Foundation and Arizona Teachings, Inc."

Khenchen Konchog Gyaltshen, founder of several Buddhist centers worldwide, is respected and beloved as an accomplished scholar, meditation master, teacher, translator, and author. In 2001 he received the high honor of being enthroned as Khenchen (great abbot). He lives in Frederick, Maryland."