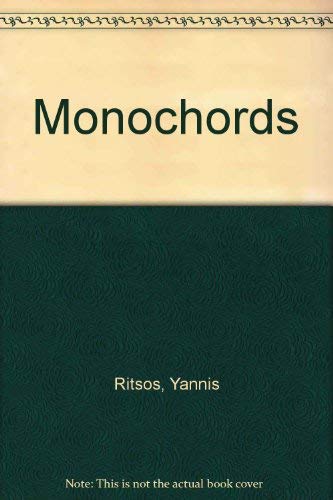 Poetry. Translated from the Greek by Paul Merchant. Yannis Ritsos (1909-1990) is one Greece's most prolific, distinguished and celebrated poets. He is the author of some 50 volumes of poetry. His Selected Poems 1938-1988 (1989) reflect that abundance as it contains 440 poems gathered from some 43 volumes. His MONOCHORDS written at about ten during 1979, can be read as miniature encapsulations by a master of the art of brevity Or they can be read as keys to his whole work, his lexicon of images and ideas. Ritsos, though a world reknown poet, is, unfortunately hardly known in the United States. Hopefully this translation of MONOCHORDS by Paul Merchant will help in spreading Ritsos1 poetry by offering toAmerican readers a 3sampler of the Greek poet1s work. Paul Merchant's translations of Ritsos, in his Greek issue of Modern Poetry in Translation (1968) and read by Ted Hughes on BBC radio in 1970, were among the first published in England. Merchant recently collaborated with Doug Erickson and Jeremy Skinner on a bibliography of the Lewis and Clark Expedition, and on a reprint of a rare Expedition text. Since 1996 he has been Director of the William Stafford Archives.

Yannis Ritsos was born in 1909 at Monemvasia in the Peloponnese. A lifetime communist, his unpretentious, memorable poems were a prominent feature of his active resistance to the German occupation of Greece and to a succession of fascist regimes. They led to the public burning of his lament Epitaphios in 1936 by the Metaxas dictatorship, and to his imprisonment during the Civil War from 1948-1952 and again during the 1967 dictatorship of the Colonels. He was transferred from this imprisonment to island exile on Samos when he became dangerously ill, and was allowed to return to Athens and to be published again in 1971. He was awarded the prestigious Lenin Prize in 1975 and received honorary degrees from the universities of Thessaloniki, Birmingham, Leipzig, and Athens. During his highly productive life he worked as an actor, dancer, book editor, calligrapher, and author of over eleven volumes of translations. His more than one hundred volumes divided between long meditations on historical themes and short enigmatic reflections on everyday events have been translated into over forty languages in more than three hundred editions. He died in November 1990, aged eighty-one.

First published in 1908, this book is a perplexing surpries for Ritsos' readers. In these poems, we see his poetic expression at its extreme simplification. Autonomous verses from the text of the collection, like fragments of ababdoned poems.

Book Description Trask House Books, 2007. Condition: Good. A+ Customer service! Satisfaction Guaranteed! Book is in Used-Good condition. Pages and cover are clean and intact. Used items may not include supplementary materials such as CDs or access codes. May show signs of minor shelf wear and contain limited notes and highlighting. Seller Inventory # 0932264301-2-4