Items related to One-act Plays for Acting Students: An Anthology of... 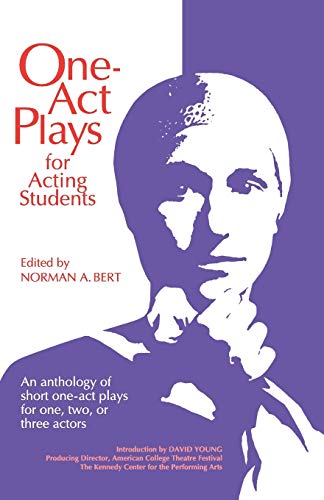 Twenty-three short length plays for a cast of one, two or three actors edited by Norman A. Bert. Each play is a complete dramatic work. The anthology offers a variety of performance rights options including royalty-free classroom use.

Norman A. Bert earned his Ph.D. at Indiana University, specializing in dramatic theory and criticism. He teaches playwriting and dramatic analysis at Texas Tech University. He has been actively involved in the Playwriting Awards Committee of the Kennedy Center American College Theatre Festival and the Playwrights and Creative Teams Program of the Association for Theatre in Higher Education. Norman has written over thirty play scripts, most of which have been published and/or produced, and has authored several books including One-Act Plays for Acting Students, Play It Again: More One-Act Plays for Acting Students, The Scenebook for Actors, and Theatre Alive!, an anthology of world drama with historical introductions. In recent years Norman has focused on writing short scripts centering on religious subject matter and social justice topics such as ethnic relations and poverty. He lives in Lubbock, Texas with his partner Amy Kim and their standard poodle Tutu.

Book Description Meriwether Pub. PAPERBACK. Condition: New. 091626047X Brand New! Not Overstocks or Low Quality Book Club Editions! Direct From the Publisher! We're not a giant, faceless warehouse organization! We're a small town bookstore that loves books and loves it's customers! Buy from us and you get great service as well as a great price! Your business is valued and your satisfaction is guaranteed!|VCF. Seller Inventory # OTF-9780916260477

Book Description Christian Publishers LLC, United States, 2004. Paperback. Condition: New. Language: English. Brand new Book. Twenty-three outstanding short length plays for a cast of one, two, or three actors are included in just one text. Absolutely no cuttings. Each play is a complete dramatic work. No walk-ons. All of the plays pride themselves on balanced roles with about five minutes acting time for each character. Performance times for the plays vary from eight to fifteen minutes. These shows, each written by a nationally known playwright, offer a wide variety of acting roles and settings for classroom or stage performance. The scripts are excellent for secondary and university level forensic competitions, as well. Also included in the text are sections on rehearsal techniques and procedures. The anthology offers a variety of performance rights options including royalty-free classroom use. This is recommended as an exceptional text for playwriting, acting, and general theatre classes. Some of the playwrights included are Tim Kelly, Megan Terry, Stephen Grecco, Patricia Montley, and Robert Patrick. These are just the short plays you have been looking for!. Seller Inventory # AAC9780916260477

Book Description Paperback. Condition: New. Paperback. 23 short length plays for a cast of one, two, or three. 5 minutes acting time for each character. Performance times vary from 8-15 minutes. Twenty-three outstanding short length plays for .Shipping may be from multiple locations in the US or from the UK, depending on stock availability. 284 pages. 0.408. Seller Inventory # 9780916260477