Items related to Elric of Melnibone 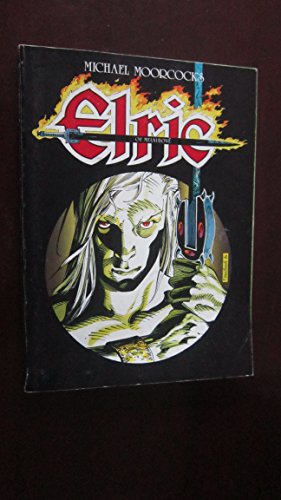 A stunning collection of tales from the master of heroic fantasy ż featuring Elric of Melnibone the first hero-villian star of song, story, rock show, pc- and role-playing-games and graphic novelsż

Elric, Moorcock's damned albino swordsman, is one of the most striking creations of heroic fantasy. Living in a world doomed to be forgotten, last emperor of the decaying empire he betrays, he is a striking figure of teenage angst who becomes something rather more. He is the central figure of a world conceived largely for its gloomy decorativeness--Moorcock's fantasy landscapes derive as much from the author's favourite Romantic and Mannerist pictures as they do from the traditions of a genre for which he had mixed feelings early in his career. Elric is doomed to sacrifice friends and lovers, as well as those enemies he wishes to spare, to the great black sword from which he derives not merely prowess but the capacity to be other than a neurasthenic invalid in these early stories. He also finds his wife Zarozinia and his friend Moonglum only to lose them, and fails heroically to save the world from the melting encroachments of the lords of Chaos. There is a dark power to these stories which belies their occasional absurdities and haunts the reader's dreams and nightmares.--Roz Kaveney

Riveting tales from the world of Elric of Melnibone.