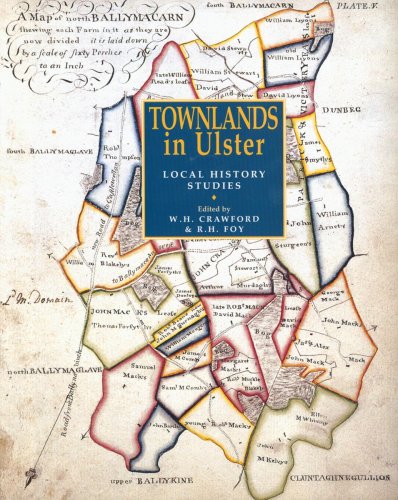 To appreciate the value of the concept of the townland the best course for us is to examine in detail every aspect of one or more of them in terms of our own existence. In local history studies we concentrate on the community that has lived in the townland. This publication will introduce the reader to the documentary sources that survive in archivies and explain how they can be related to the traditions, the artefacts and the oral evidence. It will provide a framework plus numerous worked examples for those with an interest in studying the townland where their ancestors lived. Set as a basis upon which further research could be undertaken this important study begins by choosing eight townlands across Ulster providing a variety of concepts, ideas and observations which will interest the family and local historian alike. Indeed the editors in their introduction observe, that just as local historians, not just those with a special interest in local and family hsitory, to appreciate the significance of the townland in Irish history. The townlands covered in this study include: Forttown, Co. Antrim; Scolboa, Co. Antrim; Ballymagee, Co. Down; Cranfield, Co. Down; Drumskinny 3 & Montiaghroe, Co. Fermanagh; Gallan, Co. Tyrone; Holly-hill, Co. Tyrone; and Owenreagh, Co. Londonderry. In casting their net wide the contributors have managed to build up a picture of townlands across the country and have ensured that this book is representative of the whole of Ulster and not any single part or even merely the eight townlands under study.

Book Description Paperback. Condition: Good. Item is in good condition. Some moderate creases and wear. This item may not come with CDs or additional parts including access codes for textbooks. Might be an ex-library copy and contain writing/highlighting. Photos are stock pictures and not of the actual item. Seller Inventory # DS-0901905844-3