Items related to The Seven That Were Hanged

Leonid Andreyev The Seven That Were Hanged

The Seven That Were Hanged 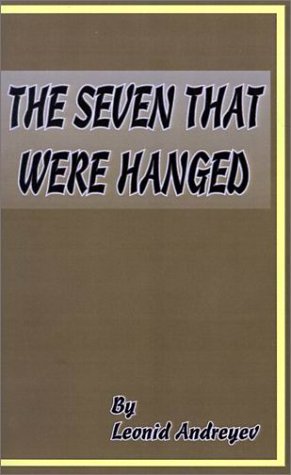 Between the two Revolutions of 1905 and 1917 Leonid Andreyev was without a doubt the foremost writer in Russia. His name was always spoken with veneration, in mysterious whispers, as a grim portentous magician who descended into the ultimate depths of the nether side of life and fathomed the beauty and tragedy of the struggle. Born Leonid Nickolayevitch in the province of Oryol, in 1871, he studied law at the University of Moscow. Those were the days of suffering and starvation; he gazed into the abyss of sorrow and despair. In January 1894 he made an unsuccessful attempt to kill himself by shooting, and then was forced by the authorities to severe penitence, which augmented the natural morbidness of his temperament. As a lawyer his career was short-lived, and he soon abandoned it for literature, beginning as a police-court reporter on the Moscow Courier. In 1902 he published the short story In The Fog, which for the first time brought him universal recognition. He was imprisoned during the revolution of 1905, together with Maxim Gorky, on political charges. Such are the few significant details of his personal life, for the true Andreyev is entirely in his stories and plays.

In The Seven That Were Hanged, death is treated in a different aspect -- not so much in a philosophical presentation of the problem as in a psychologic and realistic study. Five of the seven condemned to death are political offenders; two are common criminals. The theme of the story is the way in which each of them receives the death sentence, what their inner experiences and feelings are in the interval between the sentence and the execution, and how they meet death.

Leonid Nikolaievich Andreyev (1871 - 1919) was a Russian playwright, novelist and short-story writer, who is considered to be a father of Expressionism in Russian literature. He is one of the most talented and prolific representatives of the Silver Age period. Andreyev's style combines elements of realist, naturalist and symbolist schools in literature. --Wikipedia