Items related to Glory of the Lord : A Theological Aesthetics: 005 (Glory... 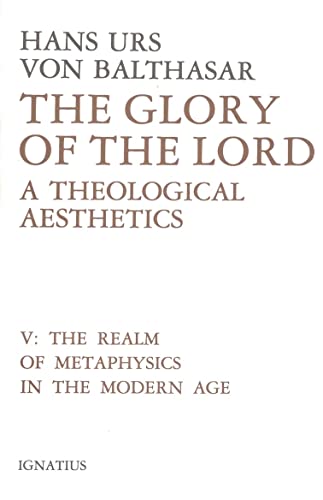 Opens with a critical review of developments in Protestant and Catholic theology since the Reformation which have led to the steady neglect of aesthetics in Christian theology. Then, von Balthasar turns to the central theme of the volume, the question of theological knowledge. He re-examines the nature of Christian believing, drawing widely on such theological figures as Anselm, Pascal and Newman.

Oliver Davies is Reader in Philosophical Theology in the University of Wales and has written a number of studies of Christian mystical writers, including Meister Eckhart: Mystical Theologian (SPCK 1991). The first volume of his Systematic Theology in three parts appeared as A Theology of Compassion (SCM Press 2001), and the second volume, On the Creativity of God, is currently under preparation.

1. THE REALM OF METAPHYSICS IN THE

2. The Realm of Metaphysics in the Modern Age (The Glory of the Lord: A Theological Aesthetics, Vol. 5)

3. The Realm of Metaphysics in the Modern Age (The Glory of the Lord: A Theological Aesthetics, Vol. 5)

4. Glory of the Lord: A Theological Aesthetics: Vol 005