Items related to Art in History/History in Art: Studies in Seventeenth... 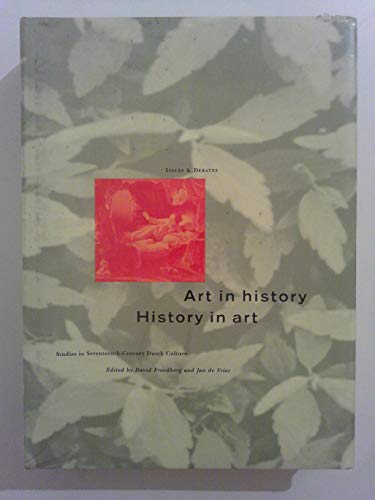 This series explores open questions at the intersection of art history and the humanities.Historians and art historians provide a critique of existing methodologies and an interdisciplinary inquiry into seventeenth-century Dutch art and culture.

Art in History/History in Art: Studies in Seventeenth-Century Dutch Culture considers the potential for a reciprocally illuminating relationship between art history and history in light of recent methodological developments in both fields. The volume opens with contributions from a historian and an art historian; they examine the weaknesses of an art history without a social or economic history and lay the groundwork for the ensuing discussions of how the procedures and methods of each discipline may serve the aims of the other. A wide critique of approaches to the interpretation of realism in Dutch pictures forms the second section of the book. Included are critical views of recent iconographic developments, as well as contributions by a plant taxonomist and a marine historian. In the volume's third section new statistical and numerical models for the study of Dutch art in Dutch society are presented by three economic historians. The concluding essay provides a constructive critique of existing methodologies within each field. Art in History/History in Art: Studies in Seventeenth-Century Dutch Culture offers the most secure basis to date for future work on the interaction between the two disciplines and between the content of pictures and the cultures that produce them.

HILLIARD T. GOLDFARB, Gardner's Chief Curator of Collections, focuses on the works of Titian, discussing the stylistic and emblematic means by which Titian asserted the power of his clients and his own stature as the "painter to princes." DAVID FREEDBERG, Professor of Art History at Columbia University, examines Rubens's profound emulation of and debt to Titian during his later career and its political context. MANUELA B. MENA marques, Curator of Spanish Paintings of the Eighteenth Century and Goya at the Prado Museum, describes Spanish patronage and the influence of both artists in Spain.

Gloria Hunniford is a major and much-loved media celebrity who appears on numerous programs. She has won many prestigious awards including "TV Personality of the Year and "Best Dressed Female. She has made a highly successful health and exercise video called "Fit for Life.

Jan de Vries is a distinguished naturopath trained in a number of branches of natural medicine including homeopathy and osteopathy. He has established a number of clinics in England, has written numerous books on health, and has a huge client network making himself accessible to everyone, from the ordinary to the rich and famous.