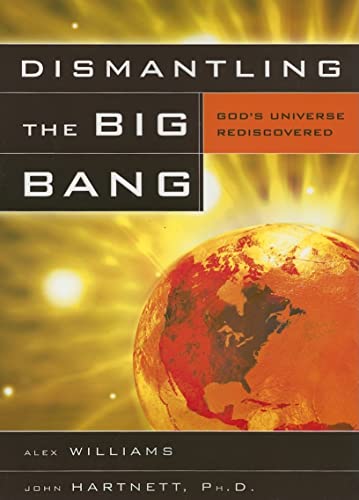 The seemingly absurd idea that all matter, energy, space, and time once exploded from a point of extreme density has captured the imagination of scientists and laypersons for decades. The big bang has provided a central teaching for the eons of time of ""cosmic evolution"", undermining the history and cosmology of the Bible. It is a theory that fails, even violating the very physical laws on which it is purportedly based. In this easy-to-read format, authors Alex Williams and John Hartnett explode this naturalistic explanation for the universe, and show that the biblical model provides a far better explanation of our origins.

In modern times, the Bible has become increasingly disconnected from most Christians' understanding of the real world. Cosmology - the way we think about the universe - has come to be totally dominated by secular beliefs, such as the Big Bang. Many Christians, including prominent leaders, have therefore felt compelled to "reinterpret" the Bible in the light of big-bang thinking. To its credit, the Big Bang is an interesting and worthwhile scientific theory, and it is the best candidate that materialists have been able to put forward to this point to try to explain the universe without God, but it is demonstrably inadequate, to say the least. Big-bang theory cannot explain the origin of the universe or of the significant objects within it (i.e., galaxies, stars, planets, and people). Big-bang theory contains no credible or consistent naturalistic cause to explain what we see. "Dismantling the Big Bang" reveals these scientific and philosophical weaknesses at the core of big-bang thinking and the contradictions to which they lead. Written on a level that laypeople can understand, it comparatively shows the intellectual superiority of the history of the universe given in the Bible as a basis for our thinking about the cosmos. We need to rediscover how to think about the universe in the only way that makes sense - from God's perspective, in the light of the history given in His Word.

Book Description Paperback. Condition: New. Paperback. The errors of the big bang exposed scientifically in layman's language. This powerful resource answers the age old cosmology debate and includes with its pages: A brief history of sci.Shipping may be from multiple locations in the US or from the UK, depending on stock availability. 346 pages. 0.467. Seller Inventory # 9780890514375