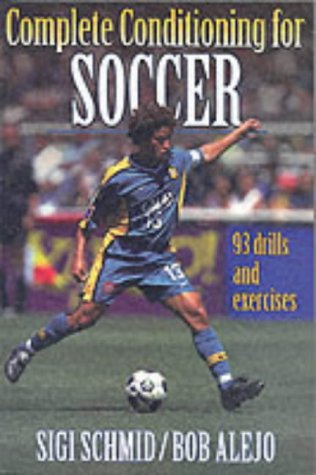 With more than 130 drills and exercises, this book is a total training plan that improves soccer players' performances. It shows players how to get into shape using flexiblity and warm-up exercises, strength and aerobic training, power development, speed an agility exercises, and individual and team conditioning with the ball.

Named the head coach of the Los Angeles Galaxy in 1999, Sigi Schmid led the Galaxy to the final round of the Major League Soccer playoffs that same year and into the MLS semifinals in 2000 and 2001. These accomplishments only add to Schmid's long and impressive record of success in competitive soccer. Before becoming coach of the L.A. Galaxy, Schmid served as head soccer coach for the University of California at Los Angeles (UCLA). His 21 years with the university were marked by an outstanding winning record of 322-63-33, 16 consecutive postseason appearances, and three NCAA Division I championships. An assistant on Bora Milutinovic's 1994 World Cup coaching staff, Schmid was appointed the coach of the U.S. Under-20 national team in 1998. He guided the team through CONCACAF qualifying rounds and into the FIFA World Youth Championships. A successful player before becoming a coach, Schmid was a starter at midfield for the UCLA Bruins from 1972 to 1975. His long standing commitment to the game was honored in 1996 when he was inducted into the National Soccer Hall of Fame as one of the first members of the American Youth Soccer Organization. Schmid currently resides in Torrance, California. With more than 20 years of experience in college and professional sports, Robert Alejo is currently the strength and conditioning coach for Jason Giambi of the New York Yankees. He had previously served as the strength and conditioning coach for the Oakland Athletics (1993-2001), the UCLA Bruins (1984-1993), and the head strength and conditioning coach for the 1994 World Cup soccer team. The author of the Oakland Athletics Winter Conditioning Manual, Alejo has also written 6 books and nearly 20 articles for major sports publications. Alejo graduated from California State University with a degree in physical education and biological sciences. Bob continues to lecture and publish on the topics of training program design and implementation for both men and women of all ages in every sport.