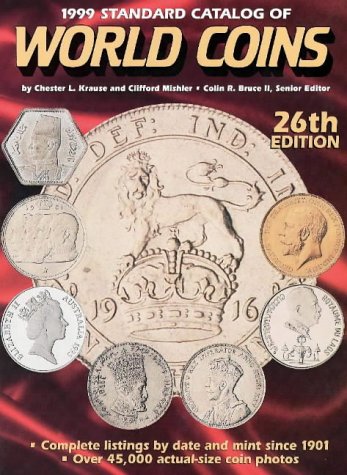 This is a sourcebook for world coins, containing more than one million prices and covering nearly every coin of the 20th century. This updated edition covers the years 1901 to 1998, and has detailed photographs of obverses and reverses. It also covers metallic composition, precious metal weights, mint and privy marks, and dating and descriptions of design details and edges. More than 30 pages of reference information are provided, including instant identifiers, number system charts, monogram identifiers, mint information and tables.

Book Description Krause Publications, 1998. Condition: Good. A+ Customer service! Satisfaction Guaranteed! Book is in Used-Good condition. Pages and cover are clean and intact. Used items may not include supplementary materials such as CDs or access codes. May show signs of minor shelf wear and contain limited notes and highlighting. Seller Inventory # 0873415930-2-4