Items related to Injustice: The Social Bases of Obedience and Revolt:... 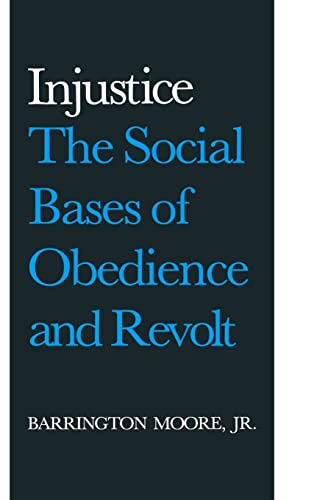 First Published in 1978. Routledge is an imprint of Taylor & Francis, an Informa company.

BARRINGTON MOORE, JR is a Lecturer in Sociology at Harvard University and Senior Research Fellow for the University's Russian Centre. He was educated at Williams College, where he took a degree in Greek and Latin, and at Yale University where he gained a PhD in sociology. His book Social Origins of Dictatorship and Democracy received the Woodrow Wilson Foundation Award in political science and the MacIver Award in sociology. He is also the author of Soviet Politics: The Dilemma of Power, Terror and Progress: USSR, Political Power and Social Theory and, with Robert P. Wolff and Herbert Marcuse, A Critique of Pure Tolerance. His most recent book, Reflections on the Causes of Human Misery and upon Certain Proposals to Eliminate Them, was given the Ralph Waldo Emerson Award of Phi Beta Kappa.

2. Injustice: The Social Bases of Obedience and Revolt

4. Injustice: The Social Bases of Obedience and Revolt

7. Injustice: The Social Bases of Obedience and Revolt