Items related to Beware the Cat: The First English Novel

Ringler, William A Beware the Cat: The First English Novel 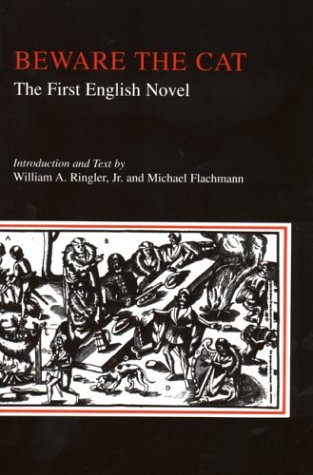 This is the earliest original piece of long prose fiction in English. It has the distinction of being the first English 'novel', far surpassing in narrative sophistication such immediate predecessors as Elyot's Image of Governance or Borde's Scoggin's Jests. This edition, besides providing a modernising text of the novel, also identifies the pseudonymous author of Beware the Cat as William Baldwin, better known as editor and principal author of the enormously popular Mirror for Magistrates (1559). The development of early English prose fiction is thoroughly documented in two informative and wide-ranging appendices. William Baldwin's place in this tradition, as well as his innovative narrative art, is discussed in the introduction, which also provides biographical information on the author, historical background to his novel, and an insight into the political and religious turmoil of the middle years of the sixteenth century.

William A. Ringler, Jr. (1912-1987), best known for his definitive edition of the "Poems of Sir Philip Sidney" (1962), was also highly regarded for a wide range of studies in English Renaissance literature, including bibliographies of half of the major and all of the minor Tudor poets for the "New Cambridge Bibliography of English Literature" (1974). "The Bibliography and Index of English Verse, 1476-1558" (1988), based on his research in poetic manuscripts, was published shortly after his death. Michael Flachmann, a former student of William Ringler's at the University of Chicago, is now a professor of English at California State University, Bakersfield, where he specializes in literature of the English Renaissance. He has published six books and numerous articles on Shakespeare and related topics.