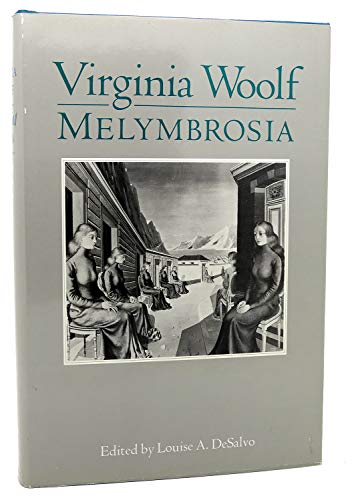 Virginia Woolf completed her first novel, Melymbrosia, in 1912 when she was thirty years old. The story concerned the emotional and sexual awakening of a young English woman traveling abroad, and bristled with social commentary on issues as varied as homosexuality, the suffrage movement, and colonialism. She was warned by colleagues, however, that publishing an outspoken indictment of Britain could prove disastrous to her fledgling career as a novelist. Moreover, the critical offensive from men would be especially harsh towards a woman author. Woolf thus revised the novel extensively, omitting much of the political candor until, in 1915, the quieter book was published under the title The Voyage Out. The Cleis Press publication of Melymbrosia offers a rare look into the formative mind of the modernist master who revolutionized twentieth century literature. Here, one sees the young Virginia Woolf learning her craft. Like James Joyce s Stephen Hero, the original treatment of A Portrait of the Artist as a Young Man, or Ralph Ellison s posthumously published Juneteenth, Melymbrosia is a "lost classic" that owes its existence to the research of a devoted scholar. In this instance, editor and Woolf authority Louise DeSalvo (Virginia Woolf: The Impact of Sexual Abuse on Her Life and Work) spent seven years reviewing more than 1,000 manuscript pages from Woolf s private papers. DeSalvo had no clear markers for proceeding to the finished draft, save for Woolf s remarks on the novel s progress, plot, and structure in her diaries. But also, the editor resourcefully relied upon clues among the papers themselves, including color of ink and paper color, where pencil or pen left off and began anew, and even the color of ribbon Woolf used to bundle manuscript pages. In short, the puzzle of Melymbrosia was eventually solved through the ingenuity and persistence of meticulous research."

"DeSalvo's newly edited version of Woolf's first novel gives us a fresh look at an important modernist writer...a vision of Woolf's first novel as she would have preferred it." - Bloomsbury Review "This book is a remarkably fresh read, and is something contemporary readers can easily relate to. By uncovering this important volume, DeSalvo has made a significant contribution to literature." - Associated Press"

Virginia Woolf, among the most distinguished authors of the twentieth century, is the author of such unequivocal classics as Mrs. Dalloway, To the Lighthouse, A Room of One's Own and Orlando, the latter two of which have been made into feature films. Louise DeSalvo is professor of English and Creative Writing at Hunter College, Visiting Distinguished Writer-in-Residence at the University of South Carolina and the author of the highly-acclaimed study, Virginia Woolf: The Impact of Sexual Abuse on Her Life. DeSalvo is also co-editor of The Letters of Vita Sackville-West to Virginia Woolf, available soon from Turnaround.

Buy Used
Condition: As New
An apparently unread copy in perfect... Learn more about this copy

Book Description New York Public Library. Hardcover. Condition: As New. An apparently unread copy in perfect condition. Dust cover is intact; pages are clean and are not marred by notes or folds of any kind. An ex-library book and may have standard library stamps and/or stickers. At ThriftBooks, our motto is: Read More, Spend Less. Seller Inventory # G0871042770I2N10