Items related to Waiting for the Barbarians

Waiting for the Barbarians 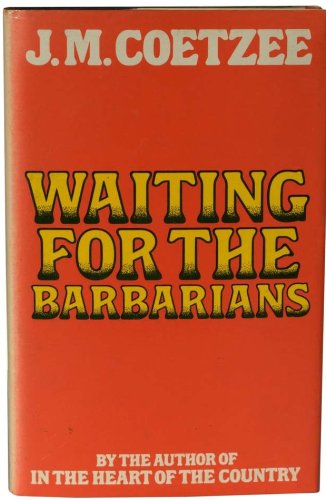 A modern classic, this early novel by Nobel Laureate J. M. Coetzee centers on the crisis of conscience and morality of the Magistrate-a loyal servant of the Empire working in a tiny frontier town, doing his best to ignore an inevitable war with the "barbarians." Waiting for the Barbarians is an allegory of oppressor and oppressed. Not just a man living through a crisis of conscience in an obscure place in remote times, the Magistrate is an analogue of all men living in complicity with regimes that ignore justice and decency. "I have known few authors who can evoke such a wilderness in the heart of a man.... Mr. Coetzee knows the elusive terror of Kafka." (Bernard Levin, The Sunday Times)

1. Waiting for the Barbarians

Book Description Hardcover. Condition: Very Good. Dust Jacket Condition: Good. First Edition. 156 pages (complete). A comfortable copy. The dustjacket has sunning to the spine and the top edge of the back cover. The back cover also has a very short closed tear to the top rim. The dj has very light shelving wear to the edges. The dj is otherwise bright, healthy. The boards are most agreeable. They are sound, steady. The frontispage has been neatly removed. The front page has a stamp from 'Friends of Florida Library' (Johannesburg). The top corner has been torn away. Otherwise, the book is in near immaculate condition. It is very clean, very clear, most confident, fresh-faced, tight - as if barely touched throughout! fk. Our orders are shipped using tracked courier delivery services. Seller Inventory # 21nk

2. WAITING FOR THE BARBARIANS

3. Waiting for the Barbarians

Book Description Hardcover. Condition: Very Good. Dust Jacket Condition: Good. First Edition. 156 pages (complete). A pleasing copy of this extraordinarily powerful, austere novel. The dustjacket has wear, scuffing. The spine has been sunned. The boards are simple, assured, sound. The frontispage has a previous owner signature. The paper-trims are a little foxed and marked from storage. The contents though, are mild mannered. There are very occasional marks about the edges from storage. In general, and by far, the pages are clean, clear, healthy, assured, comfortable, placid. fk. Our orders are shipped using tracked courier delivery services. Seller Inventory # 12ja